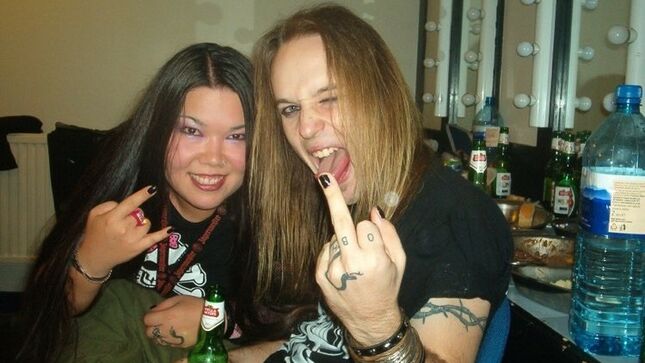 The metal world was shattered with the news that Children Of Bodom / Bodom After Midnight frontman Alexi Laiho passed away some time before New Year. He died in his home in Helsinki, Finland. Laiho had suffered from long-term health issues over the past couple years.

Former Sinergy bandmate / ex-wife Kimberly Goss launched an official Instagram page here to share photos of Laiho with fans as a tribute to his memory. That collection now includes unreleased Sinergy promo photos. Check them out below or via the Instagram link.

Goss: "Here’s some more never before seen Sinergy pics with each line-up. Alexi and myself were the only constant members throughout, but all the guys from each cycle are incredible musicians and have gone on to do bigger things. I know all former Sinergy members are grieving his loss, too. I’ve spoken to some of you, but to the rest, my heart breaks with yours. Much love to you boys, we can all be proud to say we worked with such a treasure."