SKID ROW Bassist RACHEL BOLAN On Vocalist ZP THEART Choosing Songs For His Audition - "He Goes 'You Guys Tell Me; I'm Pretty Sure I Know All Of Them'" 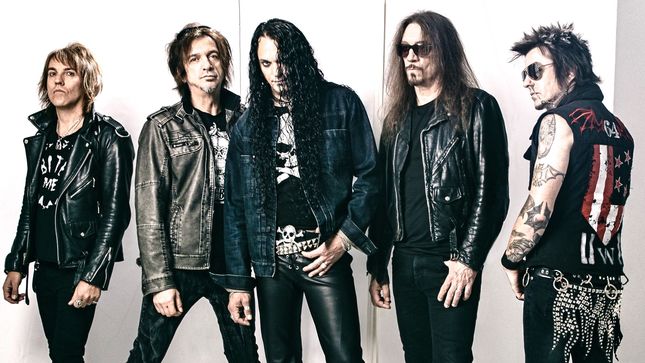 Skid Row bassist Rachel Bolan is featured in a new interview on The Chuck Shute Podcast. He reveals that singer John Corabi blew off an audition for Skid Row, comments on his relationship with Sebastian Bach when he was in the band, talks about touring with Van Halen, explains why Why ZP Theart is the best singer Skid Row has ever had, and more.

"He used to sing for DragonForce - I guess you could say (they're a) progressive metal band - and I was a fan of his voice when they came out. And I actually I was in New York, doing press and DragonForce was playing what was then the Nokia theatre, and I went and I was like, 'Man, this guy is GOOD.' He's so good. And years fast forward, DragonForce is just blowing up and, and we had a mutual friend and he he said, 'Hey, I heard that Z is going to leave DragonForce, and you were saying that he just wanted to put a fun side project together. You should you should call him man and just chit chat.' So Rob Hammersmith and I flew to England a few days before that (gig in Russia) and met with Z and said 'Yeah, man, let's do this. Let's put a side project together have fun...' and he was the coolest dude. So laid back. He drank beer. He had fun, he ate the same pub food that we both love, so it was a friendship like that, and we kept in touch over the years. Then it as it so happened he did leave DragonForce and he started the band I Am I. Our side project never materialized because Skid Row got so busy and just the distance. Just for a side project really didn't make sense, but we stayed in touch and we stayed friends. And then when things didn't work out with Tony (Harnell), I think we may have emailed or called each other like within 10 minutes of 'Hey, dude, it is time.' He flew to the States, and we got into the rehearsal room and we're just like 'What songs do you want to do?' He goes, 'You guys tell me; I'm pretty sure I know all of them.'"

Round Hill Music recently added Skid Row to its stellar publishing stable. The band has inked a worldwide administration deal for their catalog.

Of the signing, Round Hill CEO Josh Gruss commented, “Skid Row is an incredibly powerful band that I first saw play as a 12-year-old, new to the world of live music, at The Ritz in New York City with Japanese rockers EZO opening up. It was an experience I will never forget. Then to get to know Snake and Rachel personally more recently, and to have them on our roster at Round Hill, I could not be more thrilled. We will do a great job representing their publishing.”

Skid Row guitarist Snake Sabo affirmed, “The passion that Josh and everyone at Round Hill has shown towards Skid Row and our music made this a no-brainer! Their enthusiasm is infectious and we couldn’t ask for a better partnership moving forward.”

Skid Row bassist Rachel Bolan added, “I’m very happy to be working with Round Hill. And excited for what the future will bring.”

Formed in 1986 in New Jersey alongside longtime friends and colleagues Bon Jovi, Skid Row exploded onto the music scene with their 1989 eponymous debut. With such ubiquitous hits as “Youth Gone Wild,” “I Remember You” and “18 And Life,” the quintet were mainstays on MTV and the radio. Their sophomore effort, Slave To The Grind, was the first album in the metal genre to debut at #1 on the Billboard Album chart in 1991. After releasing one more studio album, the band disbanded in 1996. Skid Row regrouped in 1999 and continues to tour globally. They are currently in the studio, hard at work on a new album.

To date, Skid Row has sold upwards of 20 million albums worldwide and has shared the stage with such rock deities as Van Halen, Bon Jovi, Aerosmith, Motley Crue, Soundgarden and many more. They have played such major global festivals and venues such as Donington, Wembley, Download, Giants Stadium, Hellfest and even played in Russia at the ground-breaking, high-profile Moscow Music Peace Festival in 1989. Skid Row is Snake Sabo (guitars), Scotti Hill (guitars), Rachel Bolan (bass), ZP Theart (vocals) and Rob Hammersmith (drums).

Founded by Josh Gruss along with Richard Rowe and Neil Gillis, Round Hill Music is one of the largest independent music rights companies in the world. Through its various divisions Round Hill provides a full administrative platform for songwriters and artists that delivers everything from sync licensing, song placements, music production, label services and transparent, accurate global royalty processing and accounting. Round Hill is home to Zync Music, a full-service creative sync team that specializes in placements for film, advertising, TV, trailers, sports & games. Round Hill Records and Black Hill Records are the label homes of The Offspring, Bush, Lettuce, The Cult, Black Pistol Fire, Jared James Nichols and more.

Round Hill’s catalog includes hit songs such as “Happy Together,” “All of Me,” “She Loves You,” “Video Killed The Radio Star,” “Calendar Girl,” “Living In America,” “Under The Boardwalk,” “Best Day Of My Life,” “Fever" “I Saw Her Standing There,” “Stop! In the Name of Love,” “The Kids Aren’t Alright,” “Total Eclipse Of The Heart,” “Hit Me With Your Best Shot,” “Bye, Bye, Bye,” “When a Man Loves a Woman,” “Cherry Pie,” “The Revolution Will Not Be Televised,” “Land of A Thousand Dances,” I Got You (I Feel Good),” “Marry You,” “What A Wonderful World" and many more.

Round Hill has offices in New York, Nashville, Los Angeles and London.