SKULL FIST - New Album To Be Released In October 2018: "Stepping Back Into A More Natural Sound" 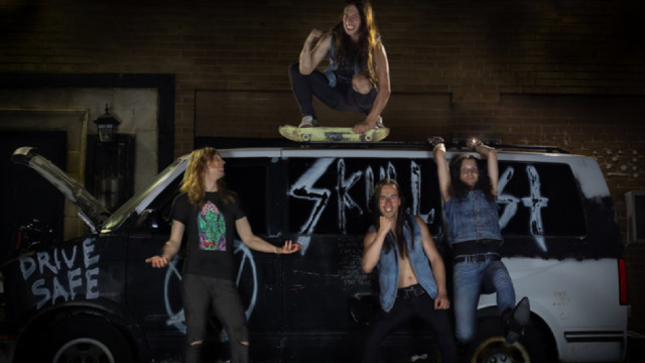 Canadian metal maniacs Skull Fist  are set to unleash their third album, Way Of The Road, on October 26th, 2018 through NoiseArt Records.

A strong moral compass in battle with even stronger drinks...

When Skull Fist set off their first riffs and deliver their third studio album full of authenticity, honesty and shady lyrics, it feels like drowning in a sea of confusing heavy metal morality. The quartet from Toronto are locked in a life long struggle with a twist on nostalgic heavy metal and a persistent desire for spiritual glory and personal peace. Relight the fire that was started with the debut record and take another step further with every note and word of the new nine song album Way Of The Road.

"It's the Goldilocks equation, dudes. The first record was too cold, the second record was too hot, for us this record feels right. After a few years of bogus behavior, big ass obstacles and a ton of patience I am still surprised we managed to get this record finished. With every album we did, including that EP, fellas have come and gone as we tried to find a sound, but I think if there was anything that summed up my idea of what Skull Fist was and is it would be this record. You might love it, hate it, or it might speak to your own life, but then again it's all relative, you know? I guess our first mission is personal satisfaction, so it felt nice to step away from all of the effects that most recordings, including our own, have hidden behind. Minimal delays and verbs, real drums, one lead vocal. Sorta stepping back into a more natural sound. Got nothing to hide and even less to lose."

As a part of the promotional work being done for Skull Fist's new record, frontman Zach Slaughter took a trip to the hospital to do some informative Q&A's. Check out the video below.

Note: It turned out to be a knee-cap pop-out, and popped back in. Zach will be skating again in two weeks.

Skull Fist recently checked in with the following update on their long-awaited new album:

"The new record is done. Will announce the release date next week or two, it will be before this winter time metal fest. All the details on the new album are going to come real damn soon. Yes, Zach is singing again and yes, we will come play in your country. Going to announce some tours, release some music videos and get this ship sailing again. More info on the fest at this location. They will announce the final lineup soon we've been told."