SLASH Discusses Fight To Save The Elephants - “I Don’t Think A Lot Of People Really Know What’s Going On”; Video 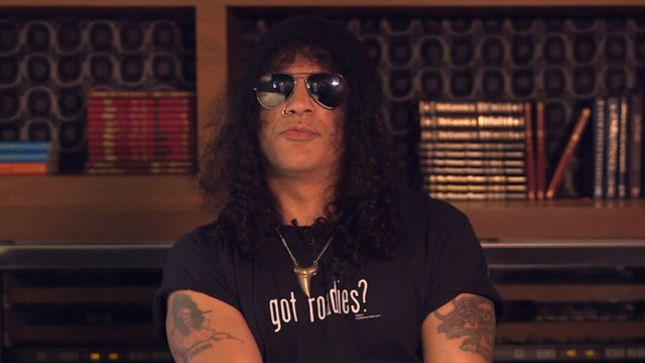 Guitar hero Slash (ex-Guns N’ Roses) this week announced the release of the song and video, "Beneath The Savage Sun”. In the footage below from RollingStone.com, Slash explains why he’s taking on the ivory trade with the new song:

Slash has partnered with International Fund for Animal Welfare (IFAW) to raise awareness of the slaughter of elephants which is leading to their early extinction. Watch the video below and get the song for free at this location. The US-based charity IFAW works around the world on every aspect of the elephant crisis-on the front lines to stop the killing of elephants, in transit countries to stop the trafficking of ivory and in consumer countries to stop the demand for ivory products. For more information, visit this location.

While on tour in South Africa, Slash and the lead singer of his band, Myles Kennedy, witnessed the devastation of the elephants first-hand and knew they had to act. Together, they wrote the song "Beneath The Savage Sun" from the perspective of an elephant whose family has been wiped out. The hypnotic rock song is a highlight on the group's current album, World On Fire.

"An elephant is killed every 15 minutes for its ivory and the result is the elephant population has declined 95% in the past century," explains Slash. "Seeing that these majestic animals are on the path to extinction, possibly within the next decade, we wrote “Beneath The Savage Sun” and partnered with IFAW. Donate to IFAW's work to take action and protect elephants."


IFAW's CEO Azzedine Downes expressed gratitude to Slash and Myles Kennedy for calling attention to the current elephant poaching crisis, "To save elephants from this senseless slaughter, we need everyone to stand up and demand stronger protection and we need to help fund action on the ground in Africa and Asia. We are grateful to Slash, Myles Kennedy and The Conspirators for reaching out to their fans to share this important message."

Slash Featuring Myles Kennedy and The Conspirators are currently in the midst of a US headlining tour which stops at Terminal 5 in New York City, tonight. The month-long tour - encompassing headlining shows and festival appearances - is the first solo trek supporting World On Fire, which is Slash's third straight solo album to debut in the Top Ten in the US and the second album with his official band The Conspirators.