SLASH Guests On "Jeff & Jimmy's Couch Of Guitars" - "I Remember Watching The Shift Of All Guitar Players Becoming EDDIE VAN HALEN... By 1979, 1980 Everybody Was Emulating Him" (Video) 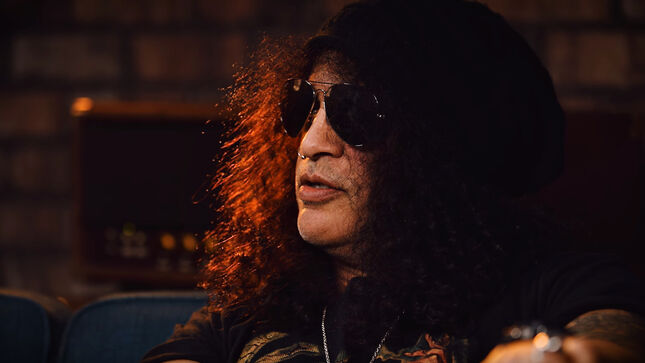 Just off tour with Guns N’ Roses and the completion of his new album, 4, by Slash Featuring Myles Kennedy & The Conspirators, Slash makes time to sit on the couch with Jimmy Vivino and Jeff Garlin to talk about everything from musical influences to BMX racing.

Slash’s outsized influence on guitars players and the rock landscape is well known, but in this episode of Jeff and Jimmy’s Couch Of Guitars, we get to hear how his mother and father’s album collections influenced him as a kid growing up in the UK and in the US, the origin of his passion for playing guitar, and what it was like working with Bob Dylan and Michael Jackson.

Slash Featuring Myles Kennedy & The Conspirators will release their new album, 4, on February 11 via Gibson Records, in partnership with BMG.

"The River Is Rising" video: