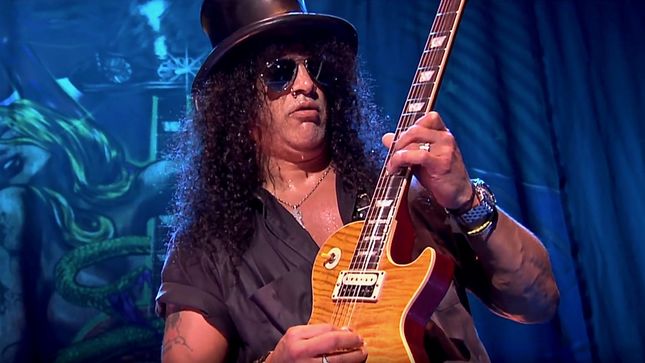 Guns N' Roses will kick off the next leg of their international tour in November, and guitarist Slash is fairly confident that the band will continue as a working entity for the foreseeable future.

In a new interview with L.A. Weekly, Slash reveals, "I feel pretty optimistic that we'll get something going sooner than later." He stops short of confirming there will be a new record, but he does so with a twinkle in his eye.

Elsewhere in the interview, Slash discusses the upcoming Slash Featuring Myles Kennedy And The Conspirators album, Living The Dream, and the monthlong tour for the album, kicking off at the Whisky A Go-Go on September 13th.

"I'm looking forward to playing in intimate spots, because I've been playing stadiums for literally two years now," Slash says. "It's nice to change it up. Normally, I would say that I like to play smaller venues as opposed to stadiums, but this last Guns tour has proved to me that you can make a stadium into a much more personal event, if the people really fucking dig you. It's an interesting thing. We did stadiums back in the day, but the crowds this time around were really off the hook, across the board, from every country. But that said, I'm looking forward to going in and doing these little theaters with the Conspirators because it's just going to be fucking fun. It's very raw and everybody's on a small stage — it's just primal."

Read the full interview, which includes testimonials for Slash from GN'R alumni Duff McKagan, Steven Adler and Gilby Clarke, as well as Alice In Chains bassist Mike Inez and others, at L.A. Weekly.

Next Wednesday, September 12th, Slash Featuring Myles Kennedy And The Conspirators will perform on ABC's Jimmy Kimmel Live! The band will perform songs on the show's outdoor stage in front of a standing-room-only crowd. The show airs at 11:35 PM.

Slash Featuring Myles Kennedy And The Conspirators will release their new album Living The Dream on September 21st via Slash's own label Snakepit Records, in partnership with Roadrunner Records.

The cover art  for Living The Dream was created by renowned visual artist Ron English.