SLAYER Guitarist KERRY KING - “AC/DC Made The Same Record For 40 Years And That’s Why We Like ‘Em… So I See No Point In Developing”; Video 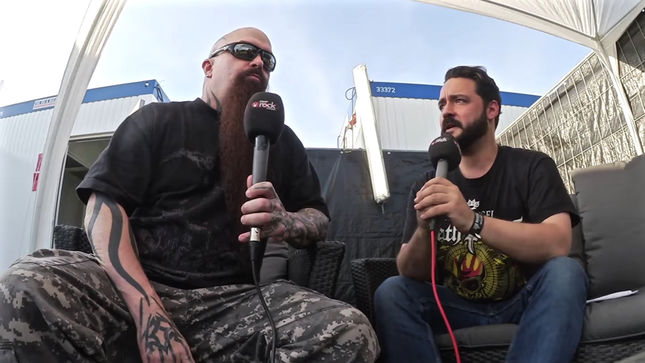 In a new video interview with EMP Rockinvasion, Slayer guitarist Kerry King discusses gear, the bands Repentless album, and the possible end of Slayer. Watch below:

On July 21st, Slayer performed at the House Of Blues in San Diego, CA, which conicided with during the San Diego Comic-Con International (SDCC). Check out fan-filmed video of the entire show below.

“I think of the songs I write as stories,” Slayer’s Kerry King told Rolling Stone in an exclusive interview. “And if nothing else, they are certainly visual.”

Slayer appeared within the walls of Comic-Con for two exclusive signings on Friday, July 22nd. Nuclear Blast America hosted and Dark Horse Comics hosted both the band and the comic’s creative team for a very limited engagement.

Regarding the comic, writer Jon Schnepp told Rolling Stone, “It’s definitely a lot of sensitive subjects that need to be explored and addressed. What’s the best way to explore those? With the chaos of metal.”

Slayer: Repentless #1 (of 3) is on comic stands in December 2016. Pre-order at your local comic shop today!