SLIPKNOT Drummer JAY WEINBERG On Wearing a Mask While Performing - "It's Not Fun, It's Not Enjoyable, But It Is Necessary; It's About Conveying Art" 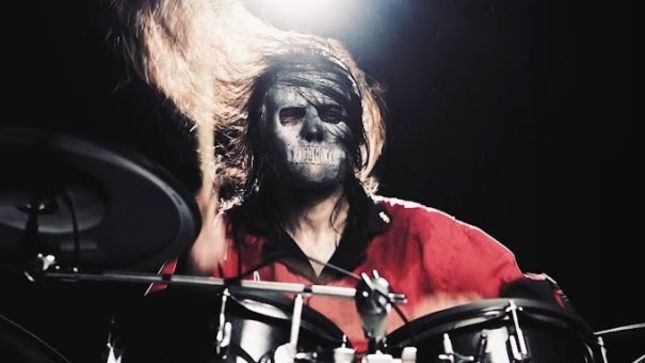 Slipknot drummer Jay Weinberg spoke with The Metal Circus TV out of Spain for an hour-long interview, discussing a host of subjects including seeing Slipknot live for the first time, replacing former drummer Joey Jordison, and performing while wearing a mask.

On performing onstage while wearing his mask

Weinberg: "You just have to deal with it, you just have to accept. It's not fun, it's not enjoyable, it's not any of those things, but it is necessary, for sure. It's about conveying art, and it's about conveying the well-rounded approach to art that Slipknot takes, so that's just part of it. And I understood that when I joined this band as a huge factor of it. That is that - and that you have to endure it because it's not gonna change. I don't have the ability or the will to change it, it's just part of it, and I enjoy it; it definitely makes it a physical thing that I've enjoyed about drums since I started playing drums. I enjoyed the physicality of it, it's one of my favorite things, that it is a challenge, so if it makes it more challenging, you have that much more of a layer of friction to ride against. You're working against elements like heat, humidity, discomfort, pain, all of that, it's all part of it. So I don't mind it, I've just learned to accept it."

Originally only available via BBC Radio 1, the Slipknot documentary, Unmasked: All Out Life, in now available internationally in its entirety via YouTube. Check it out below.

From the BBC: "A unique and fascinating insight into the career and controversies of one of the most successful and contentious heavy metal bands of all time: Slipknot. The film combines new interviews, backstage access and an exclusive live session from the nine-piece group, performing six career-defining tracks at the legendary Maida Vale Studios in front of an intimate audience. The six tracks, one from each of the band’s albums, transport the group, acknowledged by many as one of the most extreme live acts ever, from their usual arena-sized shows to a uniquely intimate and intense setting. The film highlights the group’s phenomenal 25-year career, revealing how one of the most relentless and intense-sounding groups ever have struggled with drink, drugs, depression and the death of a band member, topped the charts, outsold their peers and picked up a Grammy along the way, whilst staying as bold, fearless and exhilarating as ever."