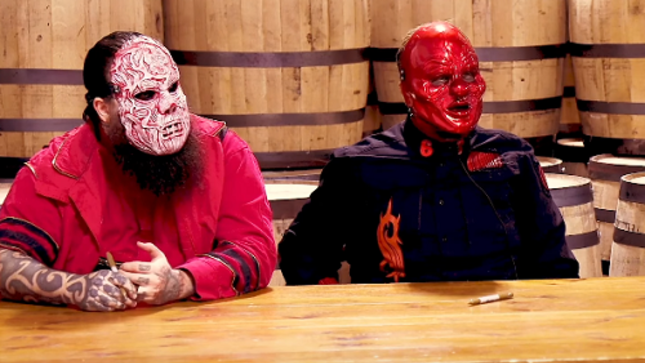 Slipknot members Clown, Vman, and NG recently participated in a video bottle signing for their No. 9 Iowa Whiskey, which can be seen below.

During the interview, percussionist M. Shawn "Clown" Crahan stated, "Right now is kind of an interesting time. We're taking this time to write some new music. So for the last week, we've been just having a good time, eating a lot of food and writing God music. So we're having a good time."

"Since everybody's taken a lot of time off, we thought we'd utilize it by getting together and do what we probably do best, which is write music," he explained. "So it's been good, because there's no pressure. It's not like we have to. We're doing it 'cause we want to. And it's just been a blessing, because boredom can set in. And I know all of us in the world are going crazy, so we're really lucky to be able to be together and do what we love most."

Asked if he thinks the current situation with COVID will influence the lyrical themes on the next Slipknot album, Crahan replied: "We don't usually speak for Corey (Taylor, vocalist), or whatever, but I can imagine that anything that affects him and affects us and affects you will be included. To the extent, I don't know how blatant it will be, I don't know, but we are all living this, and everybody is involved. I wouldn't really know what road Corey is gonna be going down or information that he wants to spread. I'm not sure. We're not quite there yet."

Get your autographed bottle of Slipknot No. 9 Reserve Whiskey here, quantities are limited.

Slipknot has collaborated with the award winning Iowa-based Cedar Ridge Distillery to bring the world an original whiskey rich in Iowa roots, No. 9 Iowa Whiskey Reserve. Made with homegrown Iowa corn featuring a sweet and spicy flavor and finished with a bold flavor at a higher 99% proof, Slipknot No. 9 Iowa Whiskey Reserve furthers the quality of the No. 9 - maturing an extra year to allow more of the flavor to rock through.