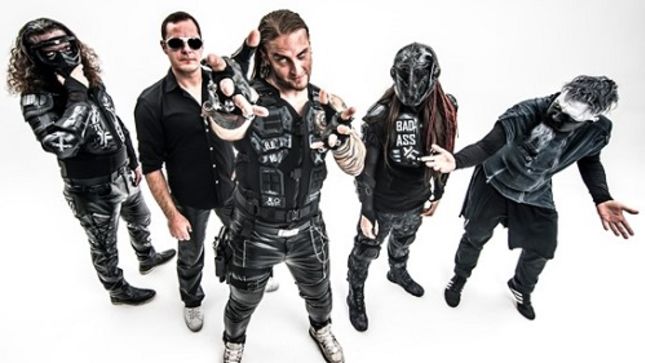 Divided have released a brand new song and music video featuring Björn “Speed” Strid. The Soilwork / The Night Flight Orchestra mainman lent his unmistakable voice to the band’s new song, “Meteorite”, which is featured on the their second full-length, Behind Your Neon Eyes, available now via Nail Records on multiple streaming platforms.

Divided guitarist PsyKlone talks about “Meteorite”: "Meteorite was the song that washed away the dam from creativity’s way during the Spring when we realized that we only had like three months before the deadline to hand over the master for the album, and there were only five songs ready for the record."

"We always wanted a song for this album that had that late '80s hit vibe you saw by the melodic rock / metal hotshots in Headbanger’s Ball around 1989, but with a modern twist. We finished the first demo in about three days with a lot of influence drawn from Hot In The Shade-era KISS, Danger Danger or Ratt, but also wanted to add some AOR and pop / rock feeling to it too. Guitars gently lay behind the catchy vocal melodies, are not too dominant  in the choruses but they bring in the drive to the verse parts."

"When the first demo was done, we instantly knew that somehow we must bring in Björn ‘Speed’ Strid, the singer of Soilwork and The Night Flight Orchestra to lend his voice to the song as it has some of that certain The Night Flight Orchestra vibe we love in their tunes. Due to the unfortunate events earlier this year, we managed to get this collaboration together. Luckily Speed was very ardent and 100% professional during this work together, and the results definitely speak for themselves. A sci-fi themed music video was also shot for 'Meteorite' directed by Peter Lerch, which we think is our best video so far. This is one of the songs we are most proud of on Behind Your Neon Eyes, hope you will dig it too!"

Behind Your Neon Eyes artwork and tracklisting: