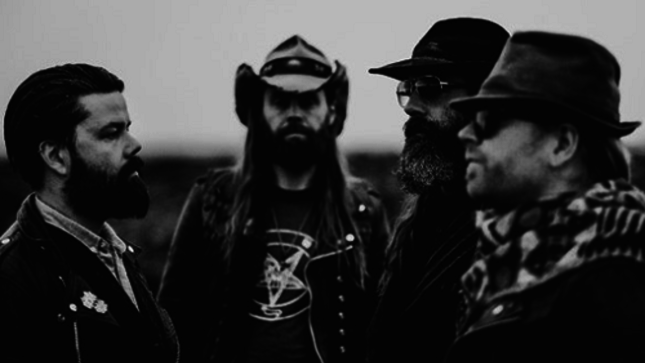 Iceland rock giants Sólstafir have posted an unboxing video for their new album, Endless Twilight Of Codependent Love. Check it out below.

Sólstafir recently unveiled the harrowing official music video for their brand new song, "Her Fall from Grace". The stark video, which chronicles the pain of watching a loved one succumb to addiction and depression, can be seen below.

Vocalist Aðalbjörn Tryggvason comments: "We present to you the next single from our upcoming album Endless Twilight Of Codependent Love entitled, 'Her Fall From Grace'. We hope you enjoy it and take from it what you need."

"Her Fall From Grace" is taken from Sólstafir's seventh studio album, Endless Twilight Of Codependent Love, which is due on November 6 via Season Of Mist. Pre-orders can be placed now at this location.

While early Sólstafir lyrics delved into Nordic mythology and critiques of organized religion, more recent songs explore their spiritual connection with nature, and lately, mental disorders ranging from depression to alcoholism and the taboo behind men in particular discussing those things for fear of being perceived weak.

“That’s the real darkness that you can't see, but you can feel it and people around you can feel it,” explains Tryggvason. “Of course, there are serial killers and plagues and whatever through history. But in modern day life, that's the true darkness around you. People kill themselves every day, and often people close to you who have been feeling so bad.”

He says the most personal song on Endless Twilight Of Codependent Love is “Her Fall From Grace,” the lone track in English. It chronicles the pain of watching a loved one succumb to mental illness.

“It's very sad when you love someone and you see them get sick,” muses Tryggvason. “Like Layne Staley said, ‘Slow suicide is no way to go.’ But you’re just watching on the audience bench, preparing for the phone call. ‘Hey man, Johnny's dead.’ ‘All right, I knew Johnny was gonna die. I've been watching him in slow motion.’” He likens the experience to seeing a relative or parent be consumed by Alzheimer’s and turn into a different person than one remembers.

Although the band’s lyrics are predominately in Icelandic, that does not prevent outside listeners from appreciating the emotional power of their music. It has been said that many fans can feel his pain even if they do not overtly understand what he is singing about.

The cover artwork and tracklisting are as follows. The painting is a watercolour of the Lady Of The Mountain, which was designed in 1864 by artist Johann Baptist Zwecker.