SPREAD EAGLE - "We Are Writing Our Follow-Up To Subway To The Stars; It's Aggressive And Maybe Even A Touch Heavier" 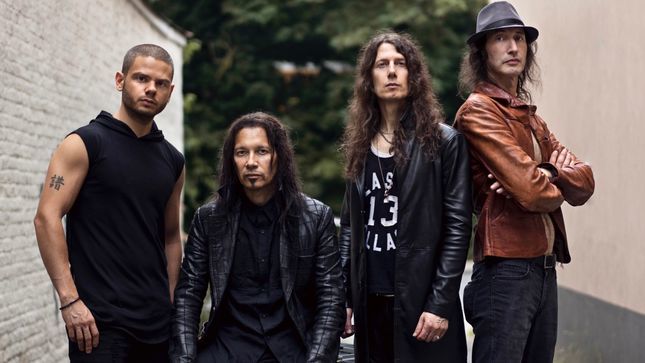 On the latest episode of the 80’s Glam Metalcast, original Spread Eagle bassist Rob De Luca and vocalist Ray West talk about their plans for a new album in 2021, their comeback album Subway To The Stars, their killer debut record and more.

On what the band is currently up to

De Luca: "We are writing our follow up to Subway To The Stars. It's going really well so far. I'm very happy. It's always so cool to be creative, I never get tired of it. Our last record got the best reviews of career. We knew we had to make a strong comeback album. You can't comeback after all this time with a plate of shit. We worked very hard on Subway To The Stars. So I am hoping it will be at the same level. What we are coming up with is aggressive and maybe even a touch heavier. It's definitely geared toward Spread Eagle fans. Spread Eagle fans are geniuses. They are the smartest music fans in the world!"

Looking back at their debut and coming out 30 years ago

De Luca: "It's crazy. It shows you how fast time goes by. We didn't tour with a lot of bands back then. We basically went out and headlined with local openers. We were heavier than a lot the bands that came out of the 80's. We weren't really a hair metal band. We called ourselves Street Metal. It was a grittier, dirtier version of what was big at the time. We liked what we were. We had our own thing in the genre."

On their record label MCA

De Luca: "I don't know if they were the best label. They were mostly an Urban label. They were a rock label in the 70's. They decided to focus more on rock after Guns N Roses sold a billion records. There is a learning curve to everything and they weren't really up to speed of knowing what to do with bands like us. We didn't have that pop hit that they could plug into their machine to make us big. Bands like Spread Eagle require a different kind of grassroots building. You need a lot of patience and people out on the street promoting it, and they didn't get that. So it could have been a lot better for us."

On getting sidelined by the grunge movement

De Luca: "We liked a lot of grunge. But one of the strangest things happened that I had ever seen regarding style. All of sudden if you weren't in a grunge band or didn't look like you were in a grunge band....you sucked! It's impossible for a band like Nirvana to come in and make everything else not good, right? It's cool when new sounds come in, but people were acting like everything that came before 1991 sucks! It was really ridiculous. We were pretty dumbfounded by it. We were like building up, succeeding, gaining more fans. Then all of a sudden you are the most uncool band in the world. It wasn't realistic and it wasn't fair."

Spread Eagle burst upon the hard rock scene of the late ‘80s/early ‘90s playing a brand of rock that hailed straight from the mean streets of New York City. When Paul DiBartolo (guitar), Rob De Luca (bass), and Tommi Gallo (drums) moved to New York City and met up with Ray West (vocals), East Coast Streetmetal was born. The group was quickly snatched up and signed to MCA/Universal Records, then sent straight into the legendary Record Plant studios to record their debut album. The self-titled debut was produced by Charlie Gambetta and featured a gritty and dangerous sound, wailing vocals and razor sharp guitar, demonstrated through songs such as "Switchblade Serenade", "Scratch Like A Cat", and "Broken City". Four years later, after the release and touring of their second album, "Open To The Public" (also produced by Gambetta), the band took an extended break and went about their own personal projects.

Spread Eagle reformed in 2006 under the direction of Ray West and Rob DeLuca (who has also worked with UFO and Sebastian Bach) along with two new members, Ziv Shalev (guitar) and Rik De Luca (drums). The band has been together ever since and decided to start production on a new album, scheduled for release in August 2019 on Frontiers. Songs for “Subway To The Stars” were put together in the Music Building in NYC, which is the exact same place where the songs for their debut album were rehearsed and written. Recording took place at Studio E in Brooklyn, NY with Grammy Award winning engineer Tom Camuso. The new album does not disappoint and picks off up where the band left off. Spread Eagle is a welcome addition to the Frontiers' family, where they will become yet another vital band from the '80s/'90s rock scene to release amazing new music in the 21st century.