STEPHEN PEARCY's New Solo Album "Will Have The '80s Rock Sound That Fans Have Come To Expect; There Are Some Heavy Bangers On There That RATT Fans Will Love" 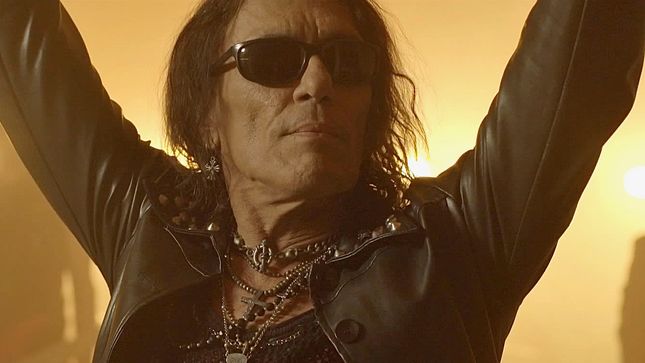 Erik Ferentinos, guitarist in Ratt frontman Stephen Pearcy's long-running solo band, spoke with All Music/All Bands about Pearcy's next record which is currently in the works. Following is an excerpt from the interview.

"Stephen and I started working on his new solo record late last year. He is currently getting a deal together to release that. He also mentioned something about a best of compilation. I'm sure he will give us some updates soon."

On the musical direction of the record:

"The new record will have the '80s rock sound that fans have come to expect from us with a few surprises thrown in for good measure! There are some heavy bangers on there that the Ratt fans will love. I try to keep it edgy but I want us to have a hit. I'm always trying to top what we've done so far with catchier riffs and melodies to get more fans interested in our music."

On the recent single release "All That I Want"

"That was one of the song ideas for the new record. Stephen cut vocals for the demo in January. He liked it so much, he decided to put it out for everyone to hear. He felt the fans needed an uplifting song to cheer them up. It got a great response and everyone seemed to dig it!"

On future plans for Pearcy's band:

"There is much uncertainty at this moment. I know Stephen is trying to keep Ratt going and they hope to resume playing in 2021. If he decides to play any smaller solo shows, I'll be ready. For now I'm just writing and keeping my chops up."

Check out the complete interview, available on Facebook, here.

Pearcy has been in and out of the studio over the last year working on his sixth solo record while Ratt was touring 2019, and continued to even before we were told to stay in and make the best of it. Making the best of it is releasing a new song titled "All That I Want". This is the first song shared by the Ratt frontman since the stay at home scenario for us all began.

Pearcy says; "I was going over vocals the other day I had recorded not long ago on this song, got a version the other night and had the file sent to me with a different vocal style. I sent it to Erik (Ferentinos, long time guitarist and co collaborator on the song) the other day and we liked it, so I thought wtf, it's so different and kinda the sign of the times right now. It was Inspired by my relationship and how being together is what we are living for, that it's more than enough to have that love from a partner, a family member or friends. It shouldn't take a bad thing to have a good thing everyday. You get it. The song has relevance to what's going on, for me, so I thought I'd share. It brings us together where we should always be anyway.

"I hope we all get back to the norm real soon and we can see all of our friends out there at the shows again. The band is crazy to get the "Big Rock Summer" Tour 2020 started. You might hear a new Ratt song, who knows."

Pearcy's new solo album will be released in 2021 via Top Fuel Records. The single will be available at iTunes. Listen below: