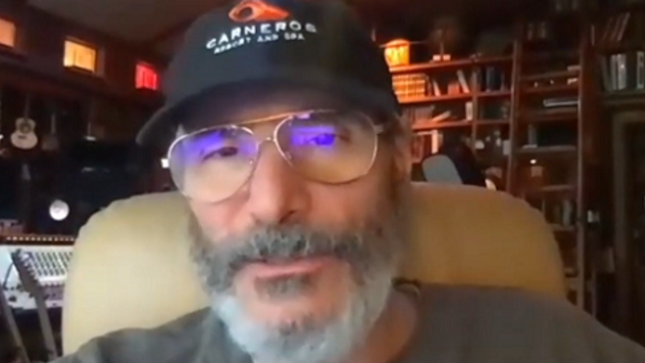 Legendary guitarist Steve Vai recently appeared on The Cassius Morris Show, to discuss numerous topics including: details of his new solo album, the Vai Academy 6.0 Camp, an upcoming Generation Axe Live CD/DVD, his relationship with Zakk Wylde, and much more.

An excerpt, detailing what Steve Vai is working on now, has been transcribed as follows:

"I always had this desire to, one day, do an acoustic record," admits Vai. "Just me playing acoustic guitar and singing; nothing virtuosic. There's this certain melody DNA that I have. Whenever I come across a song idea that falls into that category, I kind of put it on the shelf. I had a whole bunch of these and I said, ok, now it's time to make this acoustic, vocal record with these songs. So, that's what I'm working on."

"But I also have all the songs put aside and ready to record for an instrumental guitar record, that I'm hoping will be the next record I work on. Then, a tour. Like every other artist, I'm itching to get back on tour. I've got a huge tour booked, we just don't know when we can start... about 250 shows in about 52 countries. I have the itinerary, but it just keeps moving."

"The other project I'm working on that I'm very excited about is, I'm recording a bunch of my orchestra music. I've got about four hours of orchestra music that I've had performed and I've had recorded, but I wasn't really crazy with the recordings. It's for a series of records I'm releasing called Sound Theories. I've released Sound Theories One and Two. Now, with this music, once it's recorded, I'll have enough, I think, probably up to Volume Six, maybe Seven. I'm really excited about that."