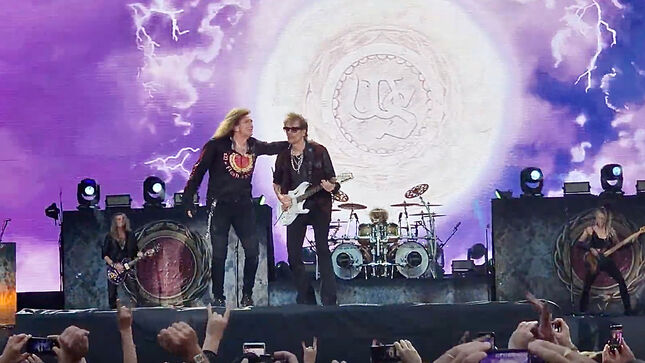 On June 23rd, Whitesnake performed at Hellfest in Clisson, France. During their set they were joined by the band's former guitarist, Steve Vai, for "Still Of The Night." Vai has checekd in with his thoughts on the brief reunion.

Vai: "It was an absolute honor to be invited by Whitesnake / David Coverdale to join Whitesnake for their final song, 'Still of the Night', at the mighty Hellfest. I’m grateful I was able to contribute one last time to this phenomenal band that was such an integral part of my career.

To feel David‘s energy on the stage again, and Tommy Aldridge‘s slamming beats, and to finally be able to jam with my friend Joel Hoekstra, and the rest of the Snakes in front of 45,000 people was just electrifying. Deep appreciation to all."

Check out fan-filmed video from the performance below.