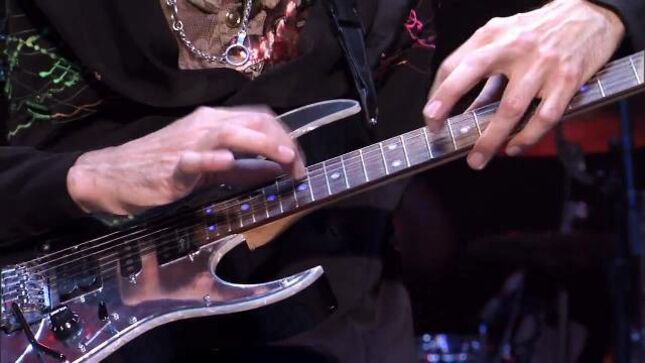 Guitar legend Steve Vai has posted a new behind-the-scenes clip on social media along with the following message:

"Sixteen years ago today (February 22nd), I released my album Real Illusions: Reflections. Here’s a video of 'Midway Creatures' in the studio."

Real Illusions: Reflections is Vai's seventh album, released in 2005 via Epic Records. It is the first part of a three-part concept album and featured Vail's David Lee Roth bandmates Billy Sheehan on bass and drummer Gregg Bissonette guesting on percussion for four tracks.

Vai recently appeared on The Cassius Morris Show to discuss numerous topics including: details of his new solo album, the Vai Academy 6.0 Camp, an upcoming Generation Axe Live CD/DVD, his relationship with Zakk Wylde, and much more.

An excerpt, detailing what Steve Vai is working on now, has been transcribed as follows:

"I always had this desire to, one day, do an acoustic record," admits Vai. "Just me playing acoustic guitar and singing; nothing virtuosic. There's this certain melody DNA that I have. Whenever I come across a song idea that falls into that category, I kind of put it on the shelf. I had a whole bunch of these and I said, ok, now it's time to make this acoustic, vocal record with these songs. So, that's what I'm working on."

"But I also have all the songs put aside and ready to record for an instrumental guitar record, that I'm hoping will be the next record I work on. Then, a tour. Like every other artist, I'm itching to get back on tour. I've got a huge tour booked, we just don't know when we can start... about 250 shows in about 52 countries. I have the itinerary, but it just keeps moving."

"The other project I'm working on that I'm very excited about is, I'm recording a bunch of my orchestra music. I've got about four hours of orchestra music that I've had performed and I've had recorded, but I wasn't really crazy with the recordings. It's for a series of records I'm releasing called Sound Theories. I've released Sound Theories One and Two. Now, with this music, once it's recorded, I'll have enough, I think, probably up to Volume Six, maybe Seven. I'm really excited about that."