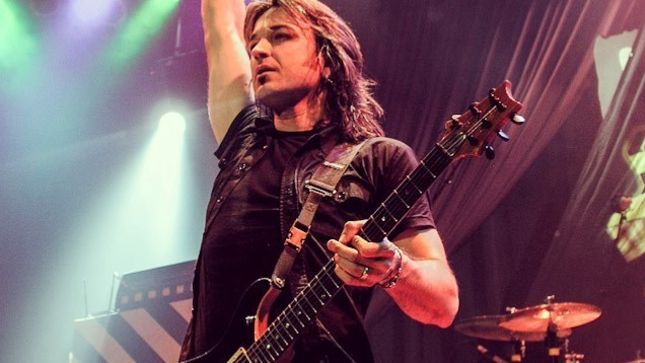 Stryper frontman Michael Sweet has shared the following via Facebook:

"Quick story for you: I played PRS guitars live for a while. I had them make two custom guitars and I wanted to become a PRS artist back in 2000. I called them regularly to see if they might be willing to take me on as an endorsee (after paying for two guitars and playing the heck out 'em) and I was always told the same thing - 'Sorry man, we’re not taking on any new artists.' This went on regularly for seven years. Then I got a gig with a band called Boston. I called PRS after joining Boston and I asked my usual question - 'Do you guys have room for me on your roster?' They said no. I then told them about the new band I was playing for and they asked who? I said 'Boston, and we’re doing a 56 city headlining run' and they said 'What do you need!?' I had seven PRS guitars on my doorstep one week later and played them exclusively throughout the 2008 tour."

"The best metal singer going today and my dear friend, Mr. Todd La Torre of Queensryche - Todd is not only an amazing singer but an amazing drummer as well! And an incredible human being. He will be joining me on vocals for a song (a duet if you will) and it may very well blow minds."

He followed it up with the this the next day:

"And this dude! Joel Hoekstra blew my mind the first time I saw him perform with Night Ranger. I’ve seen him continue to shred with Cher and Whitesnake / David Coverdale and I really admire Joel as a player and as a person. One of the best, and I’m blessed to have him on two songs (co-writes and guitars). Stay tuned."

Below is Sweet's initial update on his solo album:

"Writing songs has always been part of my DNA. Once I get into that mode the floodgates open. I spent the past few days working on some ideas and so far I have 11 that I like. Now I need to weed through them and arrange them and program drum grooves to make em’ feel right. Joel Hoekstra and I are co-writing 2 songs together so I’m waiting to hear what he comes up with and that will make 13 tracks total (12 for US, one bonus track for overseas).

So far there are old school, straight ahead metal ideas à la Priest and Dio, as well as a few up tempo riffs à la Maiden. There’s also a few ballads with a bit of a Zeppelin vibe. I’m sure there will be a few other ideas to come over the next few weeks as well.

Between now and the first week of January I’ll arrange and fine tune everything as well as compose the lyrics. So far I’m really excited about the musical direction and I’m sure you will be too. I’m bringing back a few of those classic hooks and melodies that some of you have asked for. Ask and you shall receive.

It’s going to be a killer album, friends! We start tracking on 1/14 and it should be turned in by mid April at the latest (it would be sooner but Stryper is going to Japan in early February and rehearsing so I’ll be taking a few weeks off from recording).

The album will of course be released in 2019 via RatPak Records. Thank you all for believing in me and for your undying support. I couldn’t do this without you and I’m blessed to be able to encourage and inspire all of you through music.