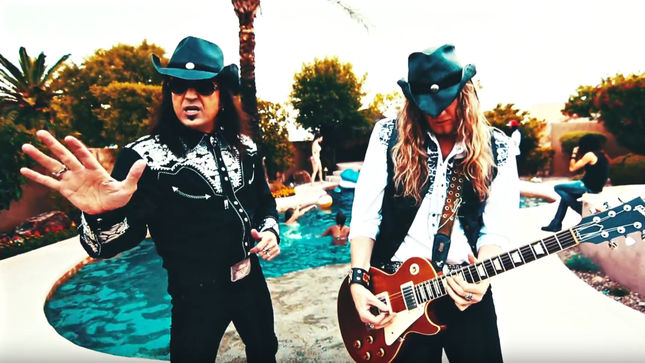 Stryper frontman Michael Sweet returns with his most intense solo release to date. One Sided War is Michael’s seventh studio solo album and is slated for release tomorrow, August 26th, via Rat Pak Records. A video for the album track “Radio” can be found below.

Michael’s solo band is comprised of Whitesnake guitarist Joel Hoekstra, Evanescence drummer Will Hunt, bassist John O’Boyle and East Coast shred-master Ethan Brosh. The new album showcases a full plate of hard rock and classic metal riffs that Michael Sweet has come to be known for throughout his illustrious musical career. The album is available for pre-order at this location.

“Musically it’s my heaviest solo album. It’s not thrash metal but there are definitely some songs on there that will pop out at you. There are some songs that have a bit of the Iron Maiden / Dio feel to them, as well as some songs that have a little bit of a Van Halen influence to them. It’s a very guitar-oriented, hard rock/metal album with lots of melodies and hooks,” explains Michael Sweet.

The fast and furious opener “Bizarre” ignites the album’s pace with its lightning fast riffage, soaring vocals and blazing guitar solos. Tracks like “Can’t Take This Life”, “One Sided War”, "Golden Age", “I Am” and “Comfort Zone” keep the metal fires ablaze, while tracks like “Radio”, “One Way” and “You Make Me Wanna” bring the hard rock vibe to the forefront.

One Sided War features only one ballad, “Who Am I?”, a heartfelt, passionate song that reminds us of the softer side of Michael’s talents. Closing out the disc is a bonus track; it’s a different version of the song “Can’t Take This Life”, a duet with Michael and 16 year old up-and-coming female vocalist Moriah Formica.

An EPK that talks about the CD and contains samples of “Bizarre” and “Radio” can be seen below. The CD was tracked at Spirithouse Recording Studios in Northampton, Massachusetts.

Sweet is best known as the singer, guitarist, songwriter and producer for Christian rock pioneers Stryper, selling over 10 million albums worldwide. In addition to Stryper, Sweet has had a successful solo career, and he served as the guitarist and co-vocalist for the legendary classic rock band Boston from 2007-2011.

The future remains bright for a man who has endured heartbreaking tribulations throughout his life and career, including the 2009 passing of his wife of more than 22 years, Kyle. In 2010, Sweet remarried to Lisa Champagne-Sweet, a woman he describes as “a Godsend and the one who fits perfectly by my side.” Sweet continues to record and tour with Stryper, as well as touring and recording as a solo artist.