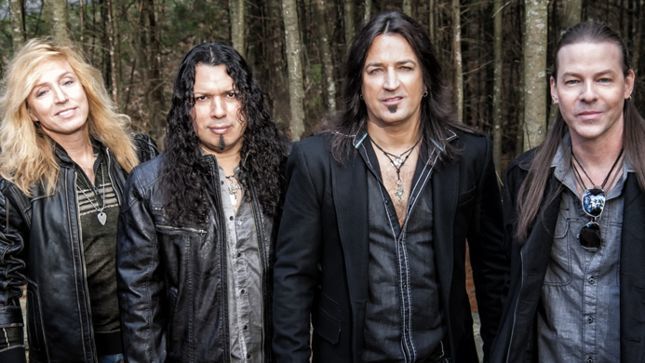 According to a few updates from the Stryper camp, the band's new studio album, Fallen, is complete and waiting release towards the end of the year:


Tim Gaines (bass): "Listening to the masters of Stryper's - Fallen. Coming later this year to a record store near you... Gonna be a good one!"

Michael Sweet (vocals, guitars): "It takes a lot to get me really excited and the new Stryper album "Fallen" has done it! This is our best in my humble opinion. God is good!"

Sweet will hold an author talk and book signing for his autobiography, Honestly on June 16th at the Flushing Library in Flushing, NY. He will read excerpts from the book and take questions from attendees. This will be followed by a meet & greet / book signing. This is a free, all ages event.

The Flushing Library is located at 41-17 Main Street in Flushing, NY 11355. Click here for more information.


Sweet recently checked in with the following update:

“I'm currently recording vocals (on and off) for the new Stryper album to be released later this year. I'm writing for a new solo album (it will be the best to date, I promise) and I start writing for an album I'll be producing/co-writing that will commence later in the year! Whew…

The solo album most likely will be released in April/May of 2016 and I'm proud to say that I'll be working with Joe O'Brien and his team over at Rat Pak Records.

I'm also doing select solo acoustic dates throughout the year as well as a Puerto Rico Stryper date in June and the 3rd Annual Stryper Fan Weekend in September. Each year gets more interesting :-)

Regarding the solo album, Will Hunt (Evanescence, Black Label Society, Staind) will be joining me in the studio (drums) and we'll be doing something completely unconventional in terms of bass - we'll be announcing exactly what very soon.

2016 will be a very busy year for Stryper Tours, Inc. and we look forward to seeing you all out on the road!”