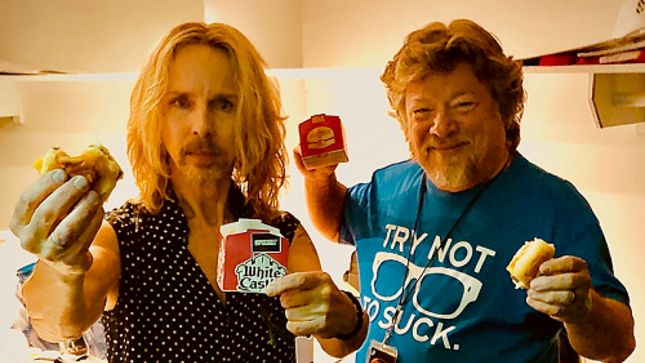 White Castle, America's first fast-food hamburger chain, has been an inspiration to artists and bands for decades. Tomorrow (Tuesday, October 13), the home of The Original Slider will celebrate titans of the music industry by inducting three extraordinary Cravers into its exclusive Cravers Hall of Fame.

Reserved for the most devout fans, White Castle's Cravers Hall of Fame has been inducting legends from main street to the main stage for nearly 20 years. Among the well-known honorees are rock icon Alice Cooper, the late comic pioneer Stan Lee, and the stars of Harold & Kumar Go To White Castle, John Cho and Kal Penn.

"There were no White Castles in my hometown, Montgomery, Alabama when I was growing up there," says Tommy Shaw. "I discovered them the first time I went to Chicago with my bandmates in MS Funk in the early ‘70s. They were so satisfying! I could eat a bag full!"

"My wife, Jeanne, and I live in Nashville now and it’s damn near impossible to pass our local White Castle on Thompson Road in Berry Hill without pulling into the drive thru and getting our regular double doubles with cheese, fries and a Dr. Pepper or shake," admists Shaw. "Life is too short, and they are exactly what we need when we need them. And now I want some! Gotta run!"

"The entire White Castle family is honored to welcome these legends to the Cravers Hall of Fame," said Jamie Richardson, vice president at White Castle. "Their devotion to the Crave knows no bounds and serves as a shining example for Cravers everywhere."

The three legends will be celebrated in a COVID safe, socially-distanced ceremony at a Nashville White Castle at 4pm CT / 5p ET on Tuesday, October 13. The Inside the Cravers Studio interviews will be live streamed on White Castle's Facebook page. In addition to attendance by Tommy Shaw and Danny Zelisko, Fiona Prine, John's wife, will be accepting on his behalf. The interview and ceremony are expected to focus on how these gifted entertainers have "fed the souls" of their craving fans over the years, as well as making their hall of fame status official.

The hall of fame's newest inductees each have a spectacular story to tell of their love for White Castle.

About 10 years ago, Tommy Shaw and his bandmates were at a banquet in Nashville where they were to receive a lifetime achievement award from the International Entertainment Buyers Association (IEBA). It was an extravagant banquet with a menu perfectly commensurate with such nice events. Yet, Tommy and good friend Danny Zelisko weren't satisfied.

Danny made a call to White Castle, disappeared for a moment and returned to the hotel ballroom with bellmen by his side carrying stacks of Crave Cases. Inside each were 30 perfect Cheese Sliders! The rest of the attendees immediately took notice and wanted in. Of the night, Shaw says, "The Crave was shared by all – it was unforgettable!"

Danny Zelisko has been sharing the Crave since growing up in Chicago in the '60s, when a dollar could secure him 10 sliders! He moved to Arizona in the early '70s, which did not yet have a Castle. Fortunately, as a concert promoter for some of the most legendary musicians of all time, Danny traveled the country a lot. And when he did, he let his Crave take him to a Castle whenever he could. He loved how, no matter the location, White Castle always delivered on that one-of-a-kind taste.

Danny started working with John Prine in the late '70s, and their ritual in every city was to eat sliders after the show. That bond – or Crave – would last a lifetime. One night, the two paid a taxi driver $100 to pick up White Castle and bring it back to their hotel! In fact, Danny shared the Crave with countless bands over the years. He would surprise the musicians and their road crews with Crave Cases – and they loved it every time. The band Styx, also from Chicago, are also mighty fans. Danny and Tommy Shaw downed a sack of sliders after their last shows earlier this year.

Of this honor bestowed on him, Danny says, "I am a craver, and always will be. Being recognized as a Hall of Fame Craver is like getting the medal of freedom. White Castle is Americana at its finest. The mere mention brings a smile to the faces of the Cravers, aka those who 'know.' Viva White Castle!"

John Prine's tour manager of nearly 30 years, Mitchell Drosin, had a first-row seat for the immensity of John's Crave. One morning, many years ago in Kansas City, Mitchell's hotel room telephone rang around 8 a.m. A woman on the line asked if her husband could meet John at his show in Houston the following day, her husband's birthday. Mitchell said, "Yep, no problem," not overthinking it at such an hour, and closed his eyes again. Yet, the phone rang again and it was the same woman with a more detailed request. She said her husband, a Canadian astronaut, needed some hours in the cockpit and could fly a private jet to them in Kansas City and continue on to Houston. Even more curious, the Canadian astronaut was to be accompanied by an Italian astronaut.

This was music life, man. Mitchell called John later in the morning to tell him what happened. John was all for it, but unbeknownst to the astronauts, he had something in mind to make the trip even more epic. En route to the airport, John said, "Let's stop at White Castle first and pick up a bunch of sliders for the pilots and attendants." When they boarded the plane, John said with a smile, "Hey, I've got lunch for everyone!" The astronauts had never had White Castle before. Needless to say, they loved every bite. The group bonded over the sliders and made the entire plane smell of grilled onions!

White Castle, America's first fast-food hamburger chain, has been making hot and tasty Sliders as a family-owned business for almost 100 years. Based in Columbus, Ohio, White Castle started serving The Original Slider in 1921. Today, White Castle owns and operates more than 360 restaurants dedicated to satisfying customers' cravings morning, noon and night and sells its famous fare in retail stores nationwide. The Original Slider, named in 2014 as Time Magazine's most influential burger of all time, is served alongside a menu of creatively crafted sliders and other mouthwatering food options, including White Castle's Impossible Slider, named by Thrillist in 2019 as the "Best Plant-Based Fast Food Burger." White Castle's commitment to maintaining the highest quality products extends to the company owning and operating its own meat processing plants, bakeries and frozen-food processing plants. White Castle is known for the legendary loyalty of its team members, more than 1 in 4 of whom have worked for White Castle for at least 10 years, and of its faithful fans, affectionately referred to as Cravers, many of whom compete each year for entry into the Cravers Hall of Fame.