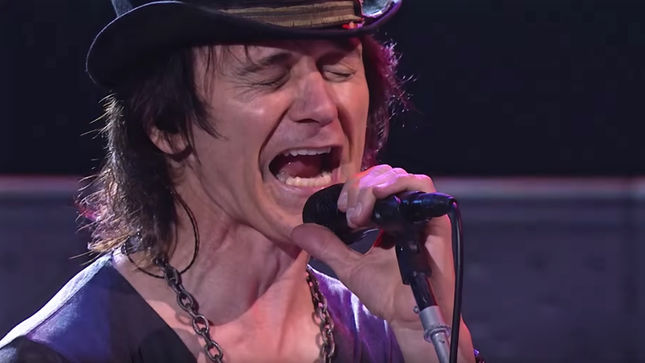 Styx vocalist/keyboardist Lawrence Gowan, who had a successful solo career long before joining the band in 1999, recently spoke to CurtainsUp about being part of the legendary band. An excerpt is available below.

Q: Is there a new album in the works?

Gowan: "There is nothing imminent. Although we’re always recording. We’re trying to figure out when we could possibly put a new album out and I have a feeling it will happen sooner rather than later. It’s just a matter of when. The main thing right now is we just released this new Live at the Orleans DVD. There’s some live stuff in there along with plenty of behind the scenes stuff with the crew and life with the band on the road. It’s sort of a different perspective. You know, when we arrive at an arena and everything is magically there. Well, there is just so much logistics that go into bringing our show from one town to another. The DVD focuses on how we are able to accomplish all of that."

Q: Is there something you look back on as a highlight in both your solo career and as a member of STYX?

Gowan: "There are so many if I had to look back, well you know there’s my song 'A Criminal Mind'. It really changed my life twice. I went from pretty much being this obscure artist to having a song people knew so well all across Canada. Then when I went to join Styx and went over to Tommy’s house basically to see how our voices sounded together, the first thing he said to me was 'Play 'A Criminal Mind' first. I want to hear you play that.' So I did and he pulled out a mandolin and starting playing along to it. He turned to JY and said 'We've got to make that a Styx song.' I thought it was amazing that this one song has changed my life twice. Once as a solo artist and then as I was joining the band, Styx. So in my solo career that would be my stand out point because it was just something for me that was so phenomenal in music. That song has really stood the test of time. We played it recently in Lewiston and just to see the reaction we got from people it really is phenomenal."

Styx, with very special guest star Don Felder (formerly of the Eagles), will take the Las Vegas stage for an unforgettable five-night limited engagement at The Venetian Theatre inside The Venetian Las Vegas. The show, Styx & Don Felder: Renegades In The Fast Lane, will be held on January 6th, 7th, 11th, 13th and 14th, 2017. For these special performances, Styx -Tommy Shaw (vocals, guitars), James “JY” Young (vocals, guitars), Lawrence Gowan (vocals, keyboards), Todd Sucherman (drums) and Ricky Phillips (bass), along with the occasional surprise appearance by original bassist Chuck Panozzo - has created an exclusive set list and brand new stage production. Don Felder is also working on some exciting plans of his own for the residency. The multi-show run will pay tribute to both Styx’s and Don Felder’s combined 45-plus years as one of the most successful rock and roll bands in history and one of rock’s most illustrious guitar legends.

"I have been an admirer of Don Felder's unique gifts as a guitar player for decades,” says Styx’s James “JY” Young. “Finally meeting him and having him on the same bill as us in 2014 was great fun. He’s like a long lost brother to me. We are going to have some great fun and nights of musical excellence sharing the stage with Don at The Venetian. Can't wait!!!”

Styx’s Tommy Shaw continues, “Sharing the stage with Don Felder over the years in various situations has always been a blast, a smile fest, where the joy of playing music is front and center.  That's the way we do it in Styx too, so you can see why we are all so excited to be coming together for our first Las Vegas installation at The Venetian. Good friends, good music, it's gonna a treat for us all!”

“I’m so excited to be sharing the stage at The Venetian with my good friends Styx,” said Don Felder (pictured above). “This is going to be one ‘ROCKING’ show in the most ‘ROCKING’ city in the US. Come join the fun and party with Styx and I this January. See you there.”

“We’re thrilled to welcome two legends of rock to The Venetian Theatre when Styx and Don Felder take the stage in January,” said Bobby Reynolds, Vice President of Booking for AEG Live. “Fans can look forward to a night full of hits along with some surprise production elements. It’s going to be five nights of incredible rock ‘n roll.”

Additionally, September 2nd marks the long-awaited release date of Styx: Live At The Orleans Arena Las Vegas on DVD, Blu-ray and Digital Formats via Eagle Rock Entertainment. It captures the band performing in July 2014 such fan favorites as: “Too Much Time On My Hands.” “Fooling Yourself (The Angry Young Man),” “Renegade,” and more. It also includes a special surprise visit from Don Felder for a rousing performance of “Blue Collar Man (Long Nights).”