Symphonic Metal Outfit ASCENDIA To Release Debut Album In February; "At The End Of It All" Video Streaming 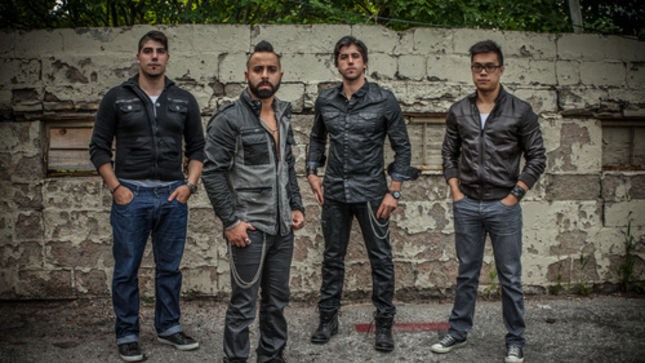 Toronto-based symphonic metal band, Ascendia, have announced the release of their debut album. Produced by Stephen James Kerr and Ascendia, The Lion And The Jester will be available February 24th. Watch the video for lead track, “At The End Of It All”, below:

Ascendia’s mammoth sound spans the Atlantic, uniting elements of North American metal with a foundation rooted in the symphonic tradition of European metal, and is poised to appeal to even the most discerning genre purists. Currently comprised of vocalist Nick Sakal, guitarist/vocalist John Lov, drummer Billy Lov, bassist John Abanador, keyboardist Maestro and bassist John Abanador, the band has been amassing serious attention and accolades from Canada’s heavy music community over the past couple of years. They earned a slot on the bill for the Toronto stop of the 2013 Rockstar Mayhem Festival alongside heavyweight headliners like Mastodon, Amon Amarth, Children Of Bodom, and Five Finger Death Punch. They’ve been tapped to support the likes of Into Eternity and Single Bullet Theory, and now, they’re set to capitalize on the buzz with their first studio album.

Brothers John and Billy have been performing together since their early teens, inspired by the sludgy sounds of ‘70s and ‘80s metal pioneers like Sabbath, Dio, and Rainbow. Soon after, their tastes shifted to more modern masters of the genre – “stuff like Nightwish, Kamelot, Killswitch Engage, and In Flames,” Billy explains.

One day, the two were walking to the music store with their longtime friend, Nick, singing a song. As John recalls, “All of a sudden, Nick let out a huge guttural scream that stopped us dead in our tracks.” As it turned out, he had quite the voice – swaying from epic, operatic singing and raucous, raging screams with ease. The seeds of Ascendia had been planted, and began to take root as the band performed metal covers of classic pop songs like “Maniac” and “Careless Whisper” for talent shows and battles of the bands.

“At that point, we knew we wanted to get serious, so we had to take a chance and start writing something else,” John explains. Their first composition was actually an acoustic ballad, “Starlit Eyes,” which remains a fan favourite and will be included as the bonus track on the upcoming record. Next, though, came a number of calamitous metal compositions – riotous down-tuned riffs and carefully orchestrated string sections anchored by machine gun rhythmic blasts and crowned by Sakal’s dynamic vocal prowess.

Part way into 2012, Ascendia put their writing on hold to focus on their live shows, leaving everything they had on sweat-soaked dive bar stages and building a following brick-by-brick with their gripping, airtight sets.

In 2013, they decided it was time to finally satisfy their growing fan base and deliver an album. “It’s been a very slow but calculated process,” John says. “We’ve taken baby steps the whole way, and I think that’s helped us develop as musicians and develop our sound.”

That sound, virtually unparalleled in Canada at this point, will be showcased in spades on the band’s first collection, bringing the urgency of their live shows to your speakers. The lyrics are in-depth and metaphorical, cryptically and poetically exploring themes of fate, deceit, and the human condition and culminating in a conceptual four-song series that tells the story of a young man and his spiritual Guardian.

Until the album drops, though Ascendia will continue their quest to conquer the North American metal map with their innovative concoction of European-inspired symphonic sounds. “We always knew there was something here,” Billy says bluntly, “and now we’re ready to start the takeover.” More information on the new LP and tour dates will be announced as it becomes available.

The young band will be showcasing their incredible live chops with a special free show on January 17th at The Smiling Buddha in Toronto.