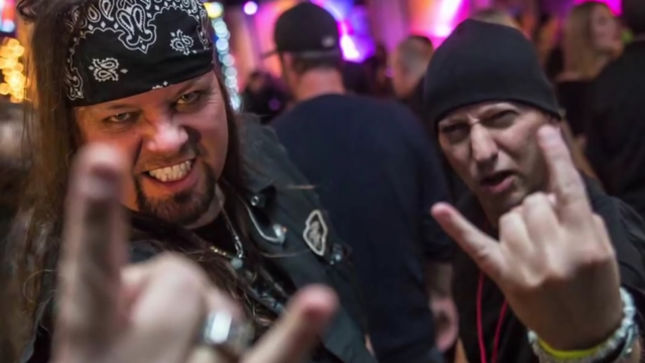 Hair I Go Again, a documentary about the determination and failures of a former hair band chasing their dreams, will officially be released worldwide on March 10th, 2016. In anticipation of the event, the producers have unveiled its newest trailer and key art.

The year was 1985. Thousands of miles away from the sonic debauchery of the Sunset Strip, two teenage friends shared aspirations of glam rock grandeur. Freshly permed and taking a page straight out of Hit Parader, a hungry, determined band was born. Fame and fortune, however, remained out of reach and the group unceremoniously imploded...probably over some chick.

Fast forward thirty years. Facing a mid-life crossroads, Kyle Kruger and Steve McClure set out on an improbable journey in order to fulfill their dreams of achieving rock & roll stardom. With credit cards maxed out and the 401K cashed in, the pair risk everything in hopes of reclaiming the magic they had as a band over a quarter century ago.

It’s a story about a lifelong friendship, insurmountable odds and dealing with the always present thought of “what if”? It’s a tale of rediscovery, determination, triumphs and failures.

Because first and last chances happen only once.