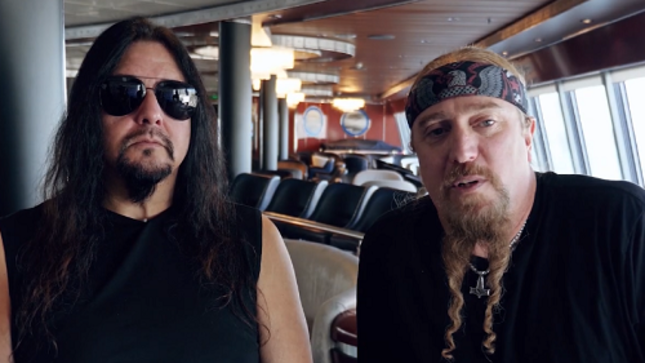 An excerpt, focusing on the as yet untitled new Testament album, expected to be released in the first half of 2020, has been transcribed by BraveWords:

Gene Hoglan: "The new album's done. It's mixed, I think. I spent quite a bit of time up at Eric's up in Sacramento where he lives, working the songs up from the ground up.:

Steve DiGiorgio: "This time, we were involved in the early, early stages, and we were working one-on-ones, and as a group more. I think the songs grew within us. When we were preparing to go to the real recording, we jammed as a band, and it felt a little bit like the old days where we'd play and stop. 'What do you think? Four times, eight times? I don't know. Try it again.' So, I think in that way, we felt a little more invested. In my opinion, it's a turn a little bit more into the Testament sound."

In live news, Testament has announced The Bay Strikes Back Tour 2020 with Exodus and Death Angel.