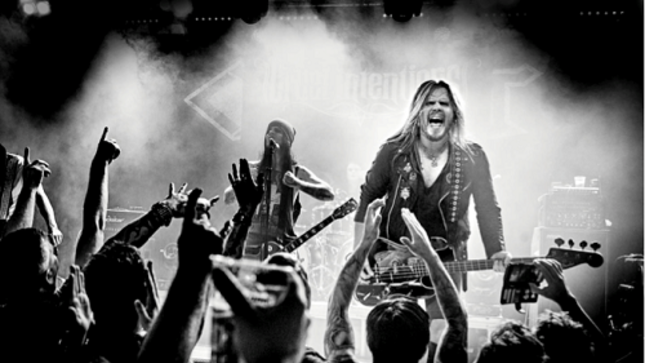 The Cruel Intentions always bring the excitement! Playing in the tradition of Guns N' Roses and Mötley Crüe, the band serves rock fans the perfect blend of melodrama and fun. The Norwegian sleaze-rockers are ready to bring back the best kind of rock music, and sweetest of street styles. For what is rock, but an homage to the greats?!

Their new record, Venomous Anonymous, will be released June 2022. The first single from the upcoming album “Sunrise Over Sunset” is an homage to LA’s Sunset Strip. “It is a hangover anthem that makes you wanna keep the party going. A reminiscence of wild and crazy nights and a tribute to all things rock n roll,” explains vocalist Lizzy DeVine. The video was filmed and edited by Marcus Undhagen.

The band has music featured in the new HBO series Peacemaker from the DC Comics universe (and the most recent Suicide Squad film). Two of The Cruel Intentions songs; “Borderline Crazy” and “Jawbreaker” were hand-picked by Peacemaker’s director James Gunn to be featured in the series.

The Cruel Intentions was founded in 2015, by Mats Wernerson, Lizzy DeVine, Kristian Solhaug, and Eiliv Sagrusten who has now been replaced by Robin Nilsson on drums.  Notably, Lizzy DeVine lived several years in Los Angeles where he was the singer and songwriter of Vains Of Jenna, a band that got their breakthrough in the American era of Rock´n Reality TV with performances on shows like Jackass, Viva La Bam, and Kat Von Dee’s LA Ink. This no-f*cks-given culture has no doubt shaped DeVine and his attitude towards music that is also evident in The Cruel Intentions music.