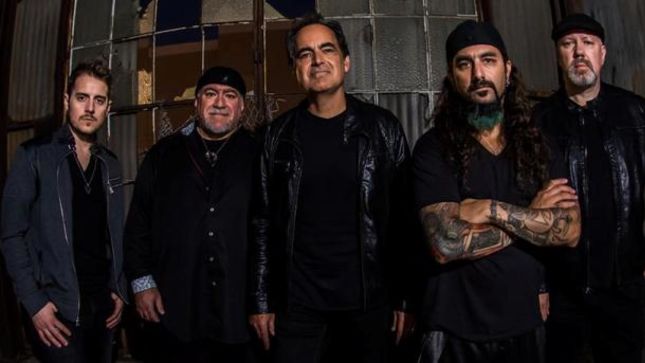 The Neal Morse Band - singer/guitarist/keyboardist Neal Morse, drummer Mike Portnoy, bassist Randy George, keyboardist Bill Hubauer and guitarist Eric Gillette - are gearing up for the release of their new album The Similitude Of A Dream on November 11th. Check out the official video for "The Ways Of A Fool" below.

The Neal Morse Band are preparing to kick off their North American tour schedule in support of the new album. According to an update from Portnoy while answering a fan question via Facebook, "we will be performing The Similitude Of A Dreamentirely in its entirety as well as other material from the NM/NMB catalog."

Drum legend Mike Portnoy (The Winery Dogs, The Neal Morse Band, ex-Dream Theater) is featured in a new in-depth interview with Classic Rock Revisited about the new Neal Morse Band album. An excerpt is available below.

CRR: How did Neal (Morse) approach you about this concept?

Mike: "The concept, lyrically, was something that he was working on individually. But the collective process with all five of us, the music, the arrangements, and the performances, we worked on that first, and got the music together first. But Neal always had the lyrical concept tucked away in the back of his mind. But I don’t think he put pen to paper in terms of the final lyrics until we had arranged two CD’s worth of music.

The difference for this album, as well as The Grand Experiment which we put out last year … the big difference is that this is now a band. It’s The Neal Morse Band. Those four letters make a tremendous difference in what the chemistry now is, you know. In the past it was always Neal’s music with Randy (George) and I just coming on board to play. But now this is a band with all five of us working together and contributing musically and creatively on every level. So I think it’s taking what Neal and I have already been doing for so many years, but it’s now taking it to a new level because of Eric (Gillette), Bill (Hubauer) and Randy’s input as well."

CRR: I remember speaking with Neal and also with you. We kind of joked around a little bit because, I think for The Grand Experiment if I remember right, everybody kind of came into it with no music written. You just wrote everything right then and there. It seems like it’s a different approach this time.

Mike: "Yeah, I think this time around there were a lot of demos and different ideas that were brought in and then we worked on it together as a band. We did a lot of the arranging and everything as a band. But there’s no shortage of ideas with this group of people. There’s just a constant influx of creativity. I mean it was a battle to narrow this down to just two CD’s. We probably could’ve easily done a three of four CD set if we had the time! (laughs). There’s just that level of creativity."