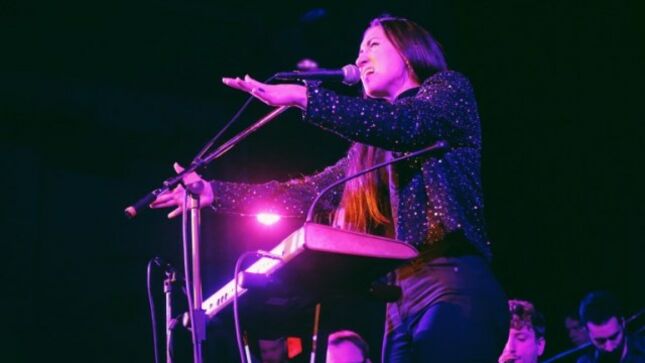 The NYChillharmonic prog-jazz-rock orchestra fronted by mastermind Sara McDonald. (vocals, composer, arranger) recently released a new single "Mean", which can be heard below. It is available via Spotify here. The group finally managed to shoot a video for the track in spite of the ongoing pandemic regulations. Check it out below.

McDonald recently spoke with FemMetal about the single and plans for a new album. Following is an excerpt from the chat.

McDonald: "It feels great to be getting attention from rock and metal blogs after years of being labeled a 'progressive-jazz big band.' Not that it bothered me much! I think it just shows that the band is evolving and heading in a new direction – which I’m excited to explore even more and share with everyone.

The first album was definitely more orchestral pop / indie-rock, with some jazz influences. So much has changed since then! I think the new music will still appeal to the same audience, but in different ways. The songs are a lot heavier now, more fleshed out, and groovier. Our first album feels polite in retrospect, but also melancholic with the desire to get bigger and richer. The next record will be…less polite (laughs). Unfortunately there is no release date for the next full album yet. Covid is keeping everyone out of the studio. In the meantime, the plan is to release a single every month for the rest of the year. We’ve got everyone recording remotely so the process is tricky and obviously less fun, but we’re going to do our best!"

McDonald: "'Mean' was written in the middle of the night two days before a headlining show at (le) Poisson Rouge in NYC. The full orchestration, including vocal line and lyrics, was written in one sitting with the printed charts barely making it onto everyone's stands the next morning at rehearsal.

'Mean' is a sonically massive, orchestral-rock piece that features chugging guitar and bass lines, anthemic vocals, swirling strings and horns, and thrashing drums. The lyrics are written from two perspectives, creating a conversation between the narrator and their own moral conscience. The line 'You're so mean to me' is repeated throughout the song, as the narrator's conscience struggles to convey the importance of self-respect to her literal self.

'Mean' navigates through a fusion of genres while wildly yet, seamlessly moving from section to section, bounding through the narrative and sonic arc to an epic and emotionally catastrophic finish."

The NYChillharmonic is a female fronted, Brooklyn-based, 18 piece, progressive-rock orchestra. The music fuses multiple genres including rock, pop, and jazz, which ultimately creates an ensemble sound that acknowledges the tradition of jazz as much as it sonically embraces experimental textures, arrangements, and harmonies.

They regularly perform on the stages of premiere rock and jazz venues in NYC and have had notable performances at ASCAP’s Songwriters: The Next Generation Showcase at The John F. Kennedy Performing Arts Center in Washington D.C., Jazzclub Unterfahrt in Munich, Germany, The David Rubenstein Atrium at Lincoln Center, Joe’s Pub, The Sheen Center, National Sawdust, (le) Poisson Rouge, and The Iridium in NYC. The music of The NYChillharmonic has been performed across 5 continents, in 10 different countries with over 400 musicians.

The main ensemble, comprised of premiere rock and jazz musicians from New York, also features YouTube star, Adam Neely - who has the largest music theory channel in the world.