THE WHO - 45th Anniversary Of Quadrophia Album Celebrated On InTheStudio; 2-Part Interview With PETE TOWNSHEND And ROGER DALTREY 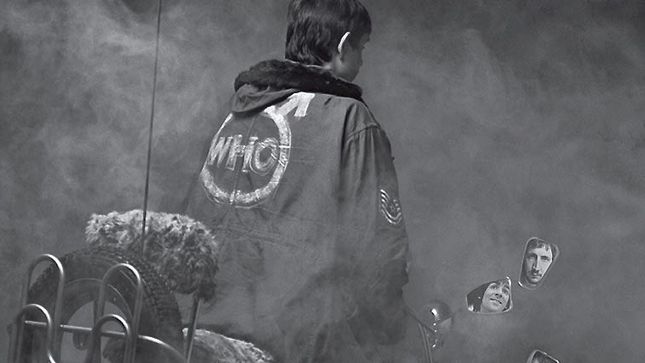 Says host Redbeard: "Pete Townshend and Roger Daltrey join me In the Studio in this classic rock interview for the first in a two-part look at the anniversary of the October 1973 Quadrophenia, which certainly is much more appreciated today than upon its initial release. It was a challenge to many US fans in 1973 precisely because it was so incredibly authentic to the London post-War experience in the same way West Side Story was the New York City version of the same period. And then there were a myriad of practical problems for the release.

"First off, vinyl records are made of polyvinyl chloride, PVC, a petroleum product. And in October 1973 precisely when The Who delivered Quadrophenia to the record pressing plants, the Organization of Petroleum Exporting Countries, or OPEC, had decided to stop selling oil to the West in a high-stakes game of chicken in a successful ploy to raise the price of crude oil. The result was that many Who fans were not able to actually obtain a copy of the double album until after the Quadrophenia tour was over!

After the universal acclaim of Tommy four years earlier, and with Live at Leeds and Who’s Next both successful single discs in between, I asked Pete Townshend if he had been encouraged to explore once again a conceptual piece. He surprised me with his frank response. “No, not at all, ” he answered quickly.” In fact, the band, management, record company, even some critics were telling me not to write another conceptual piece.” Townshend pauses for just a beat, and the faintest hint of a smile crosses his lips. “I never listened to them, of course.” Thank God he was selectively deaf, or we wouldn’t be discussing here today “The Real Me”,”Quadrophenia”,”The Punk Meets the Godfather”,”I’m One” sung by Pete Townshend himself with some great acoustic guitar (always under-rated I’ve felt ),”Is It in My Head?”, and “I’ve Had Enough” in part one."

Redbeard continues: "Your circumstances don’t matter,' cautions Quadrophenia composer Pete Townshend of The Who. ”It’s what you feel inside… Some of the most poignant and powerful letters of identification I’ve ever had on the subject of Quadrophenia have come from Californians. Eddie Vedder ( Pearl Jam ) is a good example. He was a kid who lived on a surfing beach. He saw himself as ‘Jimmy’, he identified with ‘Jimmy’, this kid who lived in a working-class area in a tiny house with no money and a tranquilizer-addicted mother, a drunken father, no prospects of a job, in a sh*thole of a place in a sh*thole of a city in a sh*thole of a world. And there he ( Eddie Vedder ) is, he’s living on a beach on the back of a surfboard.”

"As surprising as it may seem, not all famous rock’n’roll musicians are comfortable talking about their pasts, even involving their times of greatest creative accomplishment, fame, and fortune. The reasons can be myriad, and not immediately obvious. Recalling your naive exploits, often at a time barely out your teens, can be awkward from the current perspective of a 50, 60, or 70 year old. Frequently the songs, albums, and tours are tied inextricably to behind-the-scenes issues of personnel defections, firings, sour business deals, lawsuits, and personal loss which are painful to re-examine. Some fading stars whose careers are struggling now are loathe to revisit past glories simply because it underscores for them just how far from grace they’ve fallen. And more than one famous rock star simply cannot remember key periods in their lives due to memory blackouts, a frightening and unfortunately permanent result of alcoholism or drug abuse.

"Pete Townshend of The Who has no such reservations, or at least none apparent in multiple lengthy conversations with me. He can discuss easily the merits of The Who’s music from 1964’s “I Can’t Explain” right up to their Super Bowl halftime performance, as well as their demerits for the band’s behavior along the way. As The Who’s recognized Quadrophenia auteur, Townshend has assessed their over half-century of musical creation and found it to be good. Pete is a delightful, witty, thoughtful, and refreshingly honest conversationalist who can easily and effectively examine The Who’s epic 1973 opus Quadrophenia through a slightly-detached, objective eye which only the passage of time and maturity can provide."