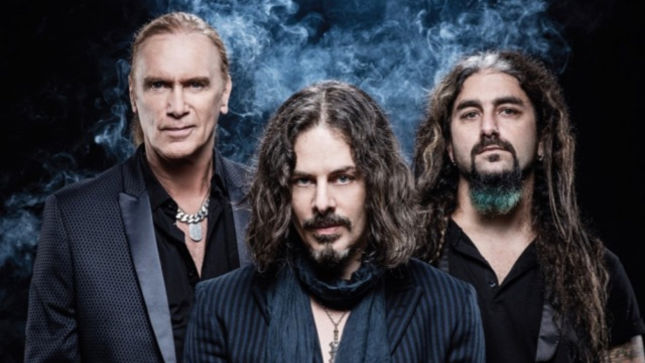 The Winery Dogs drummer Mike Portny has checked in with an update on the band's tour plans in support of their new album, Hot Streak:

"Being everyone is asking, this is just the first US leg for The Winery Dogs. The plan (so far) for 2016 is:

The band's tour schedule is currently as follows:

The Winery Dogs will be at Looney Tunes in West Babylon, NY on Wednesday October 7th. To get into this event you must purchase their new album, Hot Streak, from Looney Tunes. After you pick up the CD you will get a wristband to attend this event. The band will be playing some acoustic songs and then hanging around to meet fans. Each person can get two items signed; One will be the new CD and one personal item.

Go to this location for additional information.

Hot Streak shows the powerfully pedigreed trio’s initial burst of collective chemistry was no accident, from the strum and headbang of “Captain Love” to the propulsive uplifting vibe of “The Bridge” to the introspective acoustic harmonic convergence of “Fire.” If these three Dogs thought they captured lightning in a supper dish the first time around, Hot Streak barks ups the aural ante into exciting new territory.

“I feel we’ve taken the band to another level,” explains Richie Kotzen. “The compositions are stronger on this album. I feel more connected lyrically and musically to what I did on this record than on the last one. We’ve widened the musical scope of the band on this record and moved it forward."

Mike Portnoy continues, “Everything on this album was more of a collaboration than on the first album. There’s just a natural chemistry. The three of us really mesh very, very well, both musically and personally. The mission of this band is to write catchy songs, and not have the musicianship overpower that.”

“I’m glad we’re not playing it safe and just doing songs that automatically fit in the category of what we did on the first record,” Billy Sheehan concludes. “Some of them are a little different, and we definitely took chances. And you have to do that — otherwise, you don’t grow."

The trio first exploded onto the rock scene with their self-titled, self-produced debut album that was released July 23, 2013 on Loud & Proud Records and a sold-out worldwide tour. The Winery Dogs debuted on Billboard’s Top Alternative Albums chart at #3, Top Independent Albums chart at #4, Top Rock Albums chart at #5, Top Internet Albums at #8 and Top 200 Albums chart at #27.

“Oblivion” can be heard below.