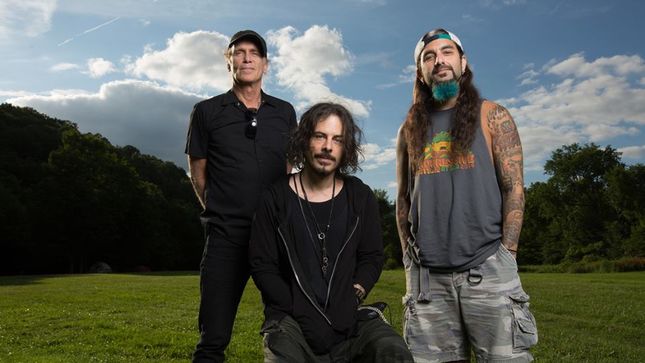 "Everything I'm doing now, I've had to start over," says Mike Portnoy, drummer for The Winery Dogs. It's a post he's held since 2012, teamed up alongside bassist Billy Sheehan (bass) and Richie Kotzen (vocals, guitars) with one studio album and a full year's worth of touring under their collective belt. Portnoy is still best known as a founding member of Dream Theater - the band he left in 2010 after 25 years - and has numerous side projects on the go (Transatlantic, Flying Colors, Neal Morse), but during our discussion towards the end of The Winery Dogs' European tour this summer he made it clear the band is his full time #1 priority now more than ever.

"We're working really hard to establish ourselves as the real deal. This isn't a one-off side-project, this is a real band and something the three of us all view as home. We have long term expectations for The Winery Dogs, so that's why we're still out here touring a year later. Something like Transatlantic is very special and dear to me, but that's more like a part time project where we'll go out for two months and then do it again four years later. The Winery Dogs is a full time thing for all three of us."
"Here in The Winery Dogs we have three guys with 100 years of experience between the three of us. That's not an exagerration, it's the truth. But, regardless of that 100 years this is still Year 1 for The Winery Dogs, so it doesn't matter how much the three of us have done in the past. We've had to start from scratch and we're building it from the ground up."

Regardless of the star power The Winery Dogs boast on paper, it's the quality of their music - recorded and live on stage - that has earned them a growing fanbase. Asked if their success thus far has met his expectations, Portnoy has nothing but good things to say.

"It's done even better. It's one of the few things I've done, if not the only thing I've ever done, that was so incredibly and unanimously embraced. The things I've done in the past, including Dream Theater, was never everybody's cup of tea. Dream Theater has a certain audience, Transatlantic has a certain audience, what I did with Avenged Sevenfold and Adrenaline Mob had a certain audience, whereas The Winery Dogs seem to have tapped into a more universal acceptance. It's the sort of band and music that I think anybody can get whether you like complex music or simple music, and I think we offer something that everybody can grasp and enjoy. It has definitely exceeded my expectations."

Remarkably, Portnoy hasn't experienced the fallout from giving up his Dream Theater prog-metal-isms for playing in what is, at its foundation, a traditional no-frills rock band. Former Adrenaline Mob bandmate and Symphony X frontman Russell Allen has been on the receiving end of numerous complaints that his band isn't progressive enough, and he's rather colourful in his responses to those fans.

"I don't have that problem with The Winery Dogs," Portnoy admits. "I had that problem with Adrenaline Mob. I felt the same frustration that Russell is talking about. Adrenaline Mob was catering to a certain audience and the prog fans had a real problem with it so I get that. It doesn't happen with The Winery Dogs and I guess that's because the music is more mainstream in comparison, more simple, and the musicianship is undeniable. When you come to see the show, you're seeing three musicians absolutely at the top of their game and three guys that are totally inspiring each other to rise to a certain level. And I think that even though we're restrained on the album, when you see us live it's like a three ring circus."

It takes only one Winery Dogs' name on the marquee bring people in. Those same people are full-on fans of the trio by the time the show is over.

"That's absolutely what's happening," says Portnoy. "People are coming in that are fans of Richie or Billy or myself, but when they leave they're fans of The Winery Dogs, and that's our goal."