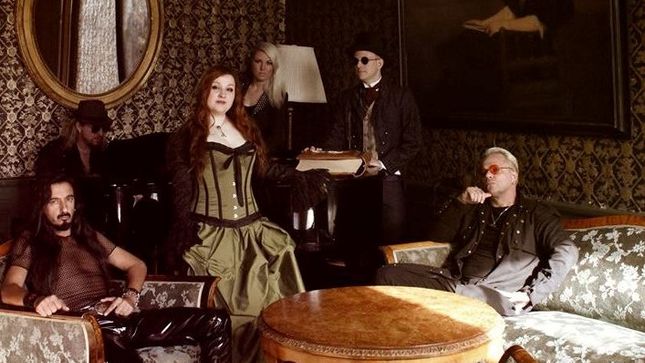 On February 2nd, symphonic metal pioneers Therion will finally release Christofer Johnsson's monumental brainchild Beloved Antichrist, a sweeping rock opera loosely inspired by Vladímir Soloviov’s A Short Tale Of The Antichrist. The entire piece reaches an impressive length of 3 hours. The dramatic and epic opus comes to life through 27 different character roles, performed by long-time band members like Thomas Vikström, Lori Lewis and Chiara Malvestiti, amongst many others. The band will unveil the first excerpt from Beloved Antichrist in single form before Christmas – and today, they have released the cover artwork designed by Thomas Ewerhart, as well as the tracklisting.

Act I
“Turn From Heaven”
“Where Will You Go?”
“Through Dust, Through Rain”
“Signs Are Here”
“Never Again”
“Bring Her Home”
“The Solid Black Beyond”
“The Crowning Of Splendour”
“Morning Has Broken”
“Garden Of Peace”
“Our Destiny”
“Anthem”
“The Palace Ball”
“Jewels From Afar”
“Hail Caesar!”
“What Is Wrong?”
“Nothing But My Name”

Act II
“The Arrival Of Apollonius”
“Pledging Loyalty”
“Night Reborn”
“Dagger Of God”
“Temple Of New Jerusalem”
“The Lions Roar”
“Bringing The Gospel”
“Laudate Dominum”
“Remaining Silent”
“Behold Antichrist”
“Cursed By The Fallen”
“Resurrection”
“To Where I Weep”
“Astral Sophia”
“Thy Will Be Done!”

Act III
“Shoot Them Down!”
“Beneath The Starry Skies”
“Forgive Me”
“The Wasteland Of My Heart”
“Burning The Palace”
“Prelude To War”
“Day Of Wrath”
“Rise To War”
“Time Has Come/Final Battle”
“My Voyage Carries On”
“Striking Darkness”
“Seeds Of Time”
“To Shine Forever”
“Theme Of Antichrist”

Currently, Therion are working on the possibility of bringing the entire production to the stage. And while this monumental undertaking still simmers away in the production halls, the band has announced a pan-European tour taking them to 25 different countries, where they will perform some new and some classic Therion hits.