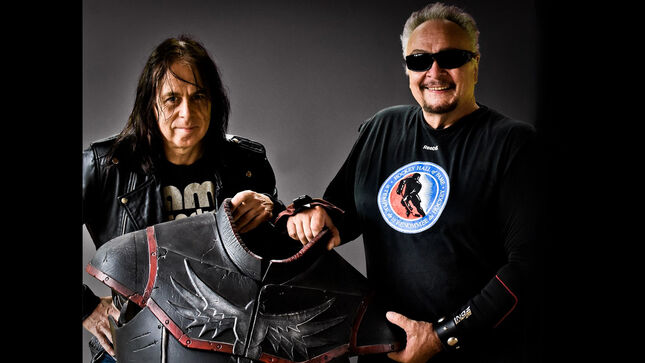 Kevin sat down to discuss his involvement in the album...

Q: What was your full involvement with the new Thor album?

Kevin: "On Alliance as with his last 3 albums, I was an engineer, co-producer, co-writer, guitarist, bassist, background vocalist. I recorded all the vocals for the entire album and was heavily involved with 7 tracks. I coordinated with other contributors and over saw the overall project to varying degrees. As it was a co-production, Jon Mikl Thor was more hands on production on the other album tracks. Of course the lines are blurred and we worked together on all of it. As we all have to wear a lot of hats these days, I also directed and created/edited the 'Because We Are Strong' video, and will be involved in future videos coming up. I have made videos for Jon for years, beginning with 'Thunderstyker'."

Q: How did you approach the new album differently than the previous album?

Kevin: "On the previous album, Rising, we had time constraints and our original intention wasn't to do a whole album. Thor had a tour booked for the USA in early 2020 and we wanted him to have an album to promote. Because of that we had to get it done quickly. It turned out that he was playing venues in areas that where hard hit by the emerging COVID epidemic and clubs and cities where closing the doors as he moved to the next town. I stayed home and re-recorded- remixed 3 single versions from Rising that I felt needed more attention.

"Ted Jedlicki, who is a writer, bassist and project coordinator on the new album and many other Thor albums mentioned that my single versions inspired him to increase production values on his contributions, so we were all on the same page.

"I would say that I didn't approach the album differently, I just had better tools and more experience, so I did what I usually do with a clearer focus and a great team I could go to."

Q: How did COVID impact the writing and recording of the new album?

Kevin: "The impact of COVID affected everything. How we wrote, how we felt and the logistics of making a record. Because I live alone I was always allowed 2 people in my bubble. They were Lisa Freakrock and Jon Mikl Thor. Lisa is a videographer and photographer, so she did a lot of work on videos and shots we needed.

"In the height of lockdown and in the early days I would put Jon in a vocal room and we wouldn't even physically see each other too much. We didn't know what the future held but threw ourselves into work and remembered that music is very healing. We had time and could polish and shape the songs. We connected with guest artists and technicians with zoom and dropbox etc, and got the parts, songs and mixes we needed. I assembled all the finished pieces and came up with an LP and CD order. Input from Thor and Ted Jedlicki changed that slightly, but I feel together we made this thing happen. I would say Jon's friendship and enthusiasm really got me through some dark days and inspired me to keep going."

Alliance includes special guest appearances from Soilwork vocalist Björn “Speed” Strid, W.A.S.P.'s Chris Holmes, Raven vocalist John Gallagher, Danko Jones, Anthrax's Neil Turbin, Ross “The Boss” Friedman and many more. It features stunning artwork from Timo Wuerz and is available on both digital as well as on CD in a digipak and limited-edition silver vinyl in a gatefold jacket.

“Because We Are Strong” video:

Niflhel (Realm Of The Dead)":