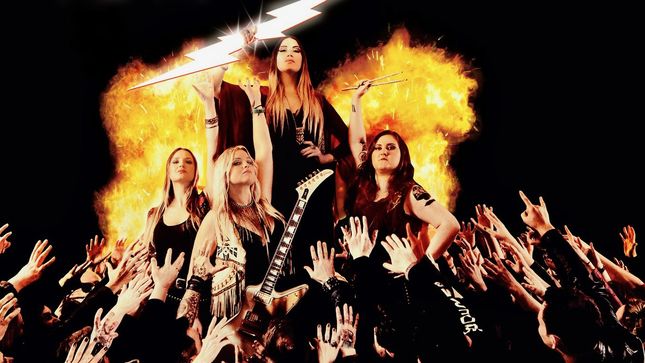 Sweden's Thundermother are going on tour again in compliance with the current Corona restrictions. With this, the band are continuing the successful first and second part of their tour, which took place in summer 2020 on the roof of a fire truck.

Their success proves them right. The new album Heat Wave entered the official album charts in many countries and stayed there for weeks. The previous single releases "Driving In Style", "Sleep" and "Dog From Hell" delighted fans worldwide.

With the continuation of their Heat Wave tour in fall 2020, Thundermother remain true to their motto: We fight for rock’n’roll!

Despite all current circumstances, the girls do their thing. Even if the situation for musicians, artists and the entire event industry with millions of jobs is massively endangered and after months of stagnancy is becoming more and more existence-threatening, Thundermother want to set an example again.

Band founder and lead guitarist Filippa Nässil: “Going on tour is a great challenge for artists and everyone involved at the moment. We don't get a lot of income from it. Nevertheless, we play gigs and do everything possible to show our fans that we are there, we are not giving up and we are all pulling in the same direction! Persevere and believe in it: rock’n‘roll never dies!"