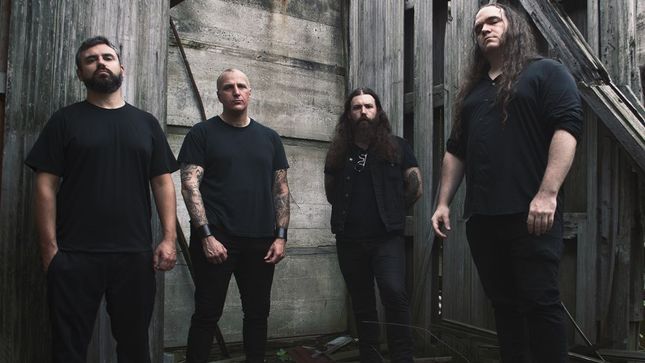 Brooklyn metal formation, Tombs, will be releasing their new studio album, Under Sullen Skies, on November 20 via Season Of Mist.  Pre-order the new album here.

Watch drummer Justin Spaeth perform a drum playthrough of the song "Bone Furnace" from the album:

“The album’s title came during all this and the sort of post-apocalyptic world we’re living in,” frontman Mike Hill explains. “It encapsulates an overall feeling of gloom and depression which is pretty much how we’ve been living for most of this year. The title was the last piece to fall into place. I remember standing on the roof of the building I was living in at the time on a grey day and it was raining – actually, it wasn’t even raining; it was a half-assed attempt at rain! – and depressing and I just thought, ‘What a sullen sky’ and it just stuck with me.”

The album starts with “Bone Furnace,” a furious blast of melodic black metal that shifts gears towards an anthemic fist-pumping slog through the Goth rock-thrash metal Venn Diagram. “Void Constellation” takes as many cues from Peaceville Three gloom and doom as it does the death metal stomp of Obituary and Incantation. “Descensum” mines the various well-worn parts of Ride The Lightning for influence before blasting the doors open with some startlingly spacious chromatic single-note atonality. As the album progresses, further textures and moods are employed via acoustic instrumentation and keyboards as well as sampled soundscapes all butting heads with furious second wave black metal and sly to nods to death rock heroes Sisters Of Mercy and Fields Of The Nephilim, all of the band’s motivations and interests being dropped into the chameleonic pair of tracks closing the album, “Sombre Ruin” and the appropriately titled “Plague Years.”

“‘Barren’ stands out as the song that’s most collaborative,” notes Hill. “Justin wrote the bulk of the riffs on that one, that sort of NWOBHM/Scorpions ending part is something I came up with, Matt added a bunch of guitar harmonies over it and Drew’s bass is laid thick underneath. That one is one of the biggest group efforts and one of the strongest songs on the record.

“I explore a lot of the archetypes that are used in folklore on this record, like werewolves and vampires which I’ve always been interested in, and on a song like ‘Secrets of the Black Sun’ I talk about the finite nature of our time on this planet, that nothing is really permanent and being aware of that whether as an individual or as a civilization, which I guess fits in with the pandemic and the changes that are going on. There are all kinds of other people, civilizations and creatures that have come and gone long before us and if you think about it over a long enough time span, everyone’s life expectancy goes down to zero.”