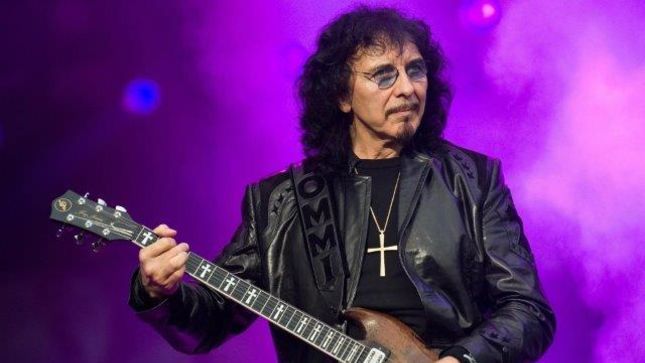 In a new interview with Australia’s theMusic, Black Sabbath guitarist Tony Iommi opened up about his future, post-Sabbath, with hopes of reuniting with former frontman Tony Martin to record new music, in addition to the reissues of some of their classic material.

Iommi confirmed that re-releases of Headless Cross and TYR are just around the corner. "We've held back on the reissues of those albums because of the current Sabbath thing with (current frontman Ozzy Osbourne), but they will certainly be happening," Iommi said. "I'd like to do a couple of new tracks for those releases with Tony Martin. I’ll also be looking at working on Cross Purposes (1994) and Forbidden (1995)."

Former Black Sabbath, Rainbow and Whitesnake drummer Cozy Powell was honoured by the Cirencester Civic Society in his hometown of Cotswold, England back on January 8th. Queen guitarist Brian May and Tony Iommi unveiled a plaque (pictured below) in Cozy's honour on the outside wall of the Corn Hall.

Former Black Sabbath singer Tony Martin was in attendance at the unveiling and said he’s reconnected with Iommi after 15 years.

“Well, what a great day,” he wrote on Facebook. “I attended the unveiling of Cozy Powell’s memorial plaque in his home town of Cirencester, along with Brian May, Neil Murray, and Tony Iommi .... And to my surprise was greeted by Tony Iommi VERY warmly. Its the first conversation of any length I have had with him in 15 years!!!! And it turns out we may well be working together soon!