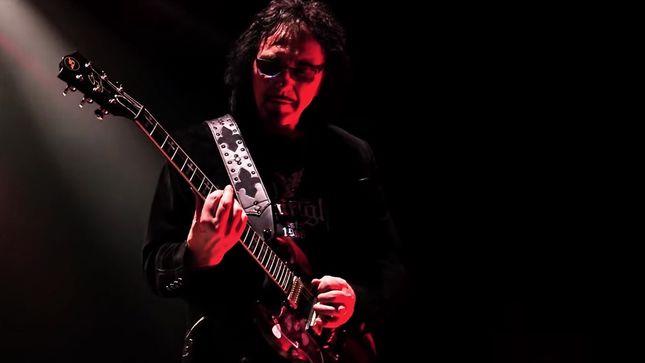 During an interview with Metal Hammer, Black Sabbath guitarist Tony Iommi discussed writing guitar riffs, some of his favourites in the band's catalogue, and what he feels is the greatest guitar riff of all time. Following is an excerpt from the interview.

Q: When was the last time you came up with a riff and thought, ‘Ooh, that’s a bit tasty’?

Iommi: "Well, I’ve got a few that I haven’t used yet that were good. There’s about four or five from the last Sabbath album (13) I that we didn’t use. I listened to a CD with them on recently. I thought, ‘Blimey, that’s good, why didn’t we use it?’”

Q: What are you going to do with all these unused riffs that you have lying around? Use them on a solo album? Or maybe Save them for a new Sabbath album?

Iommi: “It won’t be a Sabbath album, I don’t think. I really don’t know. I’ve just had (engineer) Mike Exeter over to my house, and we put some ideas down, though. I’m getting dates off Mike to see when he’s available, but really it’s down to me to go through some of the things I’ve already got. Problem is, by the time I’ve gone through them, I’ll have come up with something else.”

Iommi: “Oh my god, that’s difficult. I like 'Into The Void'. And I like some of the stuff we did with Dio – 'Heaven And Hell' was a good riff, 'Neon Knights'. There’s so many I like. I like pretty much all the stuff we’ve done.”

Q: Apart from your own, what’s the greatest riff of all time?

Iommi: “That’s even harder. There’s so many great riffs out there from the past, and up to date stuff. But you’ve got to have Deep Purple’s 'Smoke On The Water*. And of course there are a lot of Zeppelin songs. Jimmy Page has some great riffs.”

Hundreds of Black Sabbath fans are expected to watch their favourite band being presented with a ‘heavy metal’ bench at a VIP ceremony in Birmingham next month. The uniquely designed steel bench - incorporating images of the band’s original four members - will eventually be placed on the renamed Black Sabbath Bridge across the canal on Birmingham’s Broad Street.

Black Sabbath fans have now been invited to apply for a limited supply of 350 tickets to attend the heavy metal bench presentation ceremony at 11 AM on Saturday, February 9th at St Luke’s Church on Gas Street.

Black Sabbath super-fan Mohammed Osama, who initiated the commemorative idea and has worked closely with Westside BID on the project, said: “I’m thrilled that my plan to pay tribute to Black Sabbath in their home town has finally reached this presentation stage.”

Mr Osama is a 35-year-old consultant architect originally from Egypt who has lived and worked in Dubai for almost 27 years. He became a die-hard Black Sabbath fan aged eight and has since followed the band around the world, watching them more than 50 times in four different continents and becoming close friends with several band members.

Mr Osama added: “The handmade, stainless steel bench is now being forged in the city and will feature images of Ozzy Osbourne, Tony Iommi, Geezer Butler and Bill Ward for Black Sabbath fans, citizens and tourists to enjoy.” 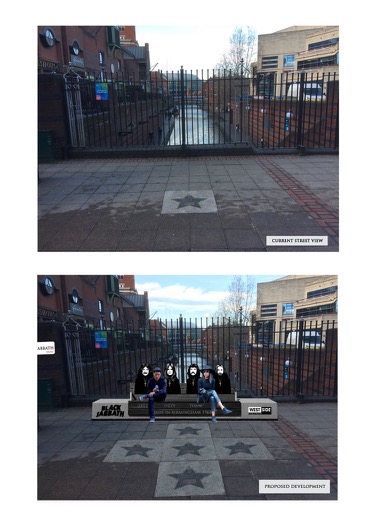 The bench artwork was created by Egyptian artist Tarek Abdelkawi - an illustrator, graphic designer and musician with an architectural background - and the words ‘Geezer. Ozzy. Tony. Bill. Made in Birmingham 1968’ will be etched on it.

The artwork has been applied by Etch Components, based in Birmingham’s Jewellery Quarter, and is being incorporated into the bench’s final manufacture by Gateway Steel Fabricators, based in Tyseley.

Ben Lungley, of Gateway Steel Fabricators, said: “We love making unique products and it’s been a delight working on this project with Mohammed and Westside BID. It’s a tricky process incorporating the design in steel and making the artwork come to life, but the end-product will be stunning.”

Mike Olley of Westside BID also revealed the event will see Black Sabbath drummer Bill Ward awarded his own star on the city’s Walk of Stars, which honours famous people from Birmingham. He said this star, along with those previously awarded to the other three band members and a fifth star to the band itself, will be realigned in the shape of a cross in front of the heavy metal bench on Black Sabbath Bridge.

Both the heavy metal bench and new stars will be presented at the February 9th event by Birmingham’s renowned comedian Jasper Carrott, chair of the city’s Walk of Stars project.

Mr Olley added: “Black Sabbath’s most ardent fans will be keen to witness this historic event and tens of thousands will enjoy visiting the heavy metal bench once it’s in place on Black Sabbath Bridge.” 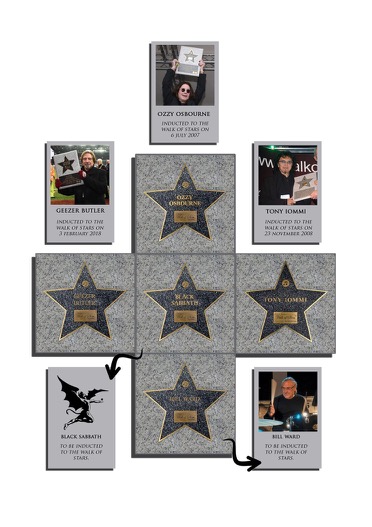 Black Sabbath’s heavy metal bench presentation is at 11 AM on Saturday, February 9th at St Luke’s Gas Street Church, 41 Gas Street, Birmingham B1 2JT. Tickets are priced at £12 each and the proceeds will be donated to the Westside Charitable Endeavour, dedicated to recording the area’s historical attributes.

Black Sabbath fans wanting to buy tickets to attend the event should apply here to Westside BID via Eventbrite.