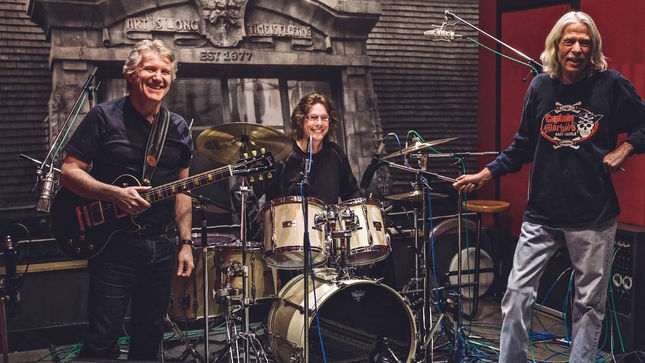 Speaking to Antihero Magazine, Rik Emmett revealed he didn’t talk to his Triumph bandmates, Gil Moore and Mike Levine, after leaving the band in 1988.

Asked how he views his time with Triumph and whether he tires of being asked about it rather than being focused on the present, Emmett says, “Yeah. Well, I suppose everyone faces that dilemma in their life. If you’re someone who has a certain amount of success or popularity, a commercial sort of thing that existed in your past, that’s going to loom even larger and become more of an ongoing thing that you deal with. But I’ve never really had the … Here’s how to put it in perspective. In 1988, I quit Triumph, and I left and I didn’t talk to those guys for 20 years. If anything’s going to give you a perspective, something like will be able to put it into perspective. I think I went on to do a lot of work on my own, more albums than Triumph ever made. I wrote more songs. I tried more styles. I did all of the things that I wanted to do. So now that I’ve come back full circle and here I am talking about Triumph’s life and its legacy and the fact that Round Hill Records has put out their stuff, at the same time, Round Hill picked up all of my stuff and they put all my stuff out. I’ve still got a website, and I’ve still got 24 new tracks that are on my website. So I’ve still got a currency here in the present that occupies me creatively and is my focus and is my priority. Having said all that, everybody chooses what their priorities are. My family has always been my priority. So my marriage, my family, my grandkids now, that’s always going to be the thing that keeps me in the present and looking forward.”

Anne: Something that people are looking forward to is this Triumph documentary. Have you seen the whole thing yet?

Rik: "I saw a rough cut — well, I wouldn’t say rough cut, I think I saw the final edit – just a couple of days ago. There are still a few little things they’ve got to clean up, some titling that goes at the bottom, and they have some animation sequences that sort of get you from one thing to another, and they’re not quite finished up yet. But, it’s exceptional. It’s really something. It’s very surreal. It’s like, this is your life, Rik. But, it’s one person’s — well, two people, really — the editor Mark and Sam Dunn, who’s the Banger Films guy. He’s really smart, and he really knows his stuff. He’s told the stories of so many other bands, that now, he sort of realizes, I’ve got to focus this down and figure out what is the story that I want to tell about this band.

It’s only going be the one story. It’s not going to be my story, and it’s not going to be Michael Levine’s story or Gil Moore’s story. It’s going to be what Sam has decided he’s going to tell from the research that he’s done and the stuff that he’s garnered and the footage that’s available. It’s a compelling story, and it’s kind of weird to see it, sort of the rise, the fall, the rise again, and then the end, all the Walk of Fame and all of the lovely things, and now, the making of this documentary. We did a fan fest, which was a thing where they could shoot fans seeing the band, and we rehearsed, and the band actually played three songs live for these fans that they flew in from all over the world. That was unbelievable. That was just an insane kind of emotional thing for us to reunite and play that. It was kind of like the capper of all the story, coming back around full circle and finishing in a really good, positive, solid way. The documentary crew captured it all on two dozen cameras from every angle. So, it’s something, for sure."

Anne: When you were first starting out with Triumph, did you have any idea that you guys would have the kind of success that you did?

Rik: "Hope springs eternal, right? I think when you start off anything, I think everybody starts off and you have the best intentions. You dream big. Then the reality sets in, and the hard work starts, but then little things will happen along the way. In the first few years of the band, it would be enough that it was like, let’s keep this going. Then, around the four or five year mark, some really good things started to happen. Then you start to go, 'Wow, this could really happen.' The dream that you had is now it’s altering, but it’s also getting fueled, so that now you feel like, this is within reach. I think I always had a positive attitude. The band was called Triumph! (Laughs)

One of the things the documentary will make very clear to everybody is that Gil Moore has this tremendous resource. He’s extremely persistent. He’s very, very focused and ambitious and driven, even more than I am. I feel like I’m a fairly focused, ambitious kind of guy, but it’s more about creativity for me. I would fight to the death about a song of mine, whereas Gil would fight to the death to get on a billing and a show in San Diego on a Thursday night. He just was really, really strong willed. I think that’s a part of it, that he never lost sight of, I’m going for this. We are going for it. He was the guy that picked the name! So, the band reflected a great deal of his steely resolve."

Read the complete transcript of the interview below here.