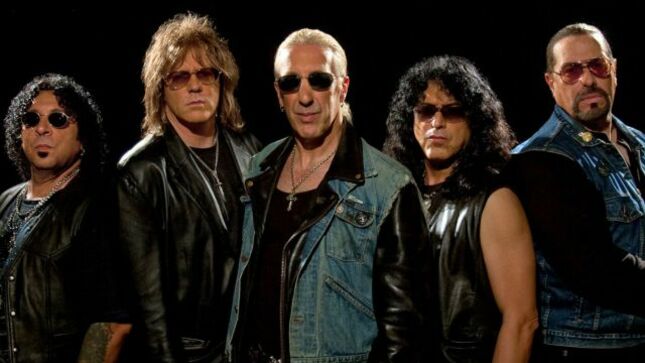 On March 20th, Twisted Sister members Dee Snider, Jay Jay French, Mark Mendoza and Eddie Ojeda reunited on Mendoza's Internet show, 22 Now, to pay tribute to late drummer A.J. Pero, who passed away six years to the day while on tour with Adrenaline Mob. Check out the stream below.

Pero, who rose to fame with Twisted Sister and eventually joined Adrenaline Mob, passed away in March 2015 after suffering a massive heart attack.

During a conversation with Ultimate Guitar's David Slavković in 2020, Snider talked about Twisted Sister ending in 2016 and touched on drummer Mike Portnoy (Sons Of Apollo, ex-Dream Theater) performing with Twisted Sister during the band's final year following the death of drummer A.J. Pero in 2015. An excerpt is available below.

UG: Mike Portnoy played on Twisted Sister's final tour, and he said it was amazing to play with Twisted Sister. What was it like working with him? And are you generally a Dream Theater fan?

Snider: "Oh, I'm not a prog-rock fan, per se. When I just got on the radio, and 'Pull Me Under' came out (in 1992) and I played it on my show, and thought it was a great song and great players - and I respect that. Mike was A.J. Pero's choice as a replacement. It's very odd; Twisted Sister did not tour heavily, we'd play maybe 10, 20 shows a year. So the shows were very-big-money shows, they were very important shows. When you don't work that much, it matters. And we realized, if somebody got sick and for some reason couldn't do a show; so if you're doing only 10 shows, you'd be losing 10% of the income for the year. So, a meeting was had, and everybody was asked to pick a replacement so we don't miss a show.

A.J. was friends with Mike, and Mike was a fan of A.J.'s, and they were both in Adrenaline Mob. So, Mike was A.J.s's fill-in guy. So it's not a matter of life and death - we're not talking about dying, we were just talking about, 'Hey, if I can't make it... Say, if my child is in the hospital and I need to be home, I will have a replacement.' And six months later, A.J. dies (on March 20, 2015). And it was almost like he had said who he wanted to replace him. So, we went to Mike, and Mike came in. An incredible drummer.

And what was really incredible, the classiest thing - people need to know this - he studied A.J.'s live tapes, and he copied them, beat for beat, hit for hit, cymbal crash for cymbal crash. He stepped in, and it was like... he changed nothing. He put no Mike Portnoy in there, he did A.J.'s live parts. And when we asked him if he wanted to do a solo, he said, 'I will not do a solo.' And what we did is that we lowered a video screen, and we had the second-to-last show that A.J. played filmed, and we played that solo. Mike would not do the drum solo, and we let A.J. do a drum solo every night.

People in the audience would cry. So, this is a classy person, a talented person, a respectful person who respects other musicians and their art as well - so, he's not just about showing off and being Mike Portnoy. I love that guy."