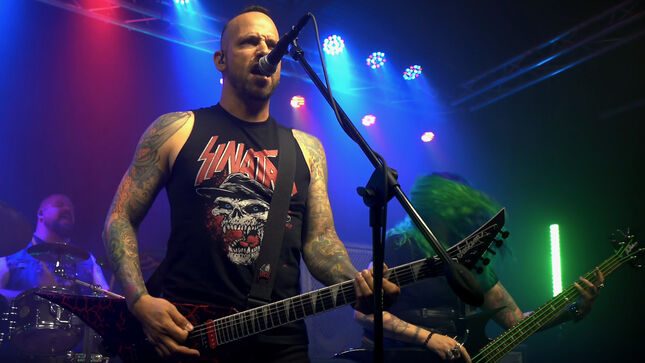 Melodic metal tribute band, Union Black, is the newest project from current Gruesome and former Malevolent Creation drummer Gus Rios. Yesterday, the band released their first single, covering the hit track from American new-wave icons Information Society, "What's On Your Mind". The music video for the song can be found below.

Speaking about the band's cover of "What's On Your Mind", Gus Rios shares: "I've had this idea floating around for over fifteen years. Insert a global pandemic, over a year off from practically any musical activity, almost dying from COVID...and I finally made it happen! For our cover of 'What's On Your Mind' by Information Society, I was simply humming the verse melody in my head one day and couldn't remember what song it was! Then it hit me and I thought 'man, this would make such a killer metal tune!'"

Rios goes on to add: "I went into my studio and tracked the whole thing myself. Hector (Rios) added synths and I sent it off to Matt Laplant (Skindred, Nonpoint, Sikth) to mix and master. We couldn't be happier with the end result! The video was shot and directed by Ileana Frey of Blind Beast Productions. My concept was to have a visual contrast which to me is similar to what we do musically. One part brutal metal and one part beautiful melody."

Union Black is the brainchild of current Gruesome and former Malevolent Creation drummer Gus Rios. Gus was a guitar player first before focusing on the drums so he's going back to his roots as the guitar player and singer for Union Black. The band is rounded out by his brother Hector Rios on lead guitar, Sondra Hemmerick on bass and Ruston Grosse from death metal legends Master on drums. Union Black takes songs from artists such as Depeche Mode, NIN, Information Society, and Type O Negative and reimagines them with all of their collective influences. Traces of thrash, Florida death metal, and goth metal are all melded with the darker melodies and creates new much heavier versions of these already amazing songs.