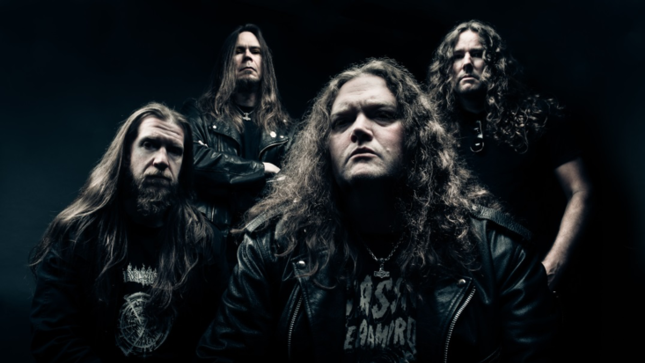 The mighty Unleashed have released the second strike from their upcoming masterpiece, The Hunt For White Christ, out on October 26th via Napalm Records. A lyric video for the album's title track can be seen below.

Singer and bass player Johnny Hedlund explains the story behind the new song: "After the despicable acts of terror against women and children in the South, and the devastation of the villages (as seen on the album cover), The Midgard Warriors decide to hunt down White Christ, all the way to Jorsala if need be."

When it comes to Swedish death metal, the traditional Stockholm way and death metal per se, there is one band you have to mention: Unleashed. Formed in 1989 by vocalist/bass player Johnny Hedlund, Unleashed have been delivering supreme death metal from day one. Dealing with Viking traditions and values, and honing their craft, they have become extreme metal pioneers, musically and lyrically, inspiring legions of other bands with their sound.

The Hunt For White Christ is the fourth album in the continued story line of the World Of Odalheim and their Midgard warriors - a story authored by Johnny Hedlund himself, comprising of the past, present, and what Hedlund’s deems as the future of the Viking traditions and values. The album was recorded in the spring of 2018 at Chrome Studios, and does not simply mark the Swedes' 13th full-length album: it also solidifies the bands impact on history, paving the way to their 30th anniversary in 2019. Three decades of metal onslaught, and they have neither lost their bite, nor their love for pure death metal mayhem.

Johnny Hedlund about The Hunt For White Christ: "On our way towards the bands 30th anniversary in 2019, comes the release of our 13th full length album, The Hunt For White Christ. The band is very much looking forward to meeting our Warriors all over the World on tours and festivals to hear your comments on the new album. And make no mistake, Odalheim will be ours! Let the hunt begin. Hail Odin!"

Napalm Records states: "We are more than happy about the upcoming release of The Hunt For White Christ by the Swedish death metal institution Unleashed. Beeing in business almost three decades, they proofed their standing and excellence to fans all over the world. Brace yourself for this brutal monument by the swedish chief vikings!"

"Lead Us Into War" lyric video: