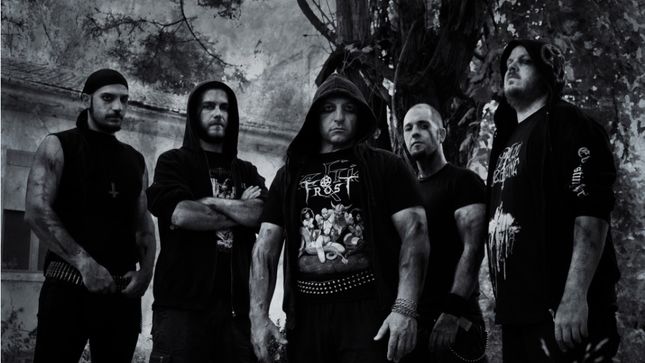 Long-running black metal veterans, Varathron, will release a brand new album, entitled Untrodden Corridors Of Hades, on November 21st in Europe and December 9th in rest of the world. A full album stream can be found below.

The cover of their first full-length since 2009's Stygian Forces Of Scorn has been created by Mark Riddick (Arsis, Absu, Mystifier, Nun Slaughter, The Black Dahlia Murder) and can be seen below.

The Greece-based band consists of Stefan Necroabyssious (vocals), Achilleas C (guitars), Sotiris (guitars), Stratos (bass) as well as Haris (drums) and has been active on the stage since 1989. Band's early albums are considered to be the cornerstones of the Hellenic black metal scene, alongside the releases of Necromantia and Rotting Christ, with whom the group shared members as well as similar fascination towards early style. Varathron's trademark are mid-paced riffs that have a classic, old-school feel strengthened by a progressive view, as well as epic atmosphere that only few can match.

Varathron will have its new album released in various formats including: digipack CD, box CD (including a bonus CD with rare tracks, a patch and a poster; limited to 350 copies), black vinyl,  coloured vinyl (hand-numbered) and digital (images below). Pre-orders are available at this location.