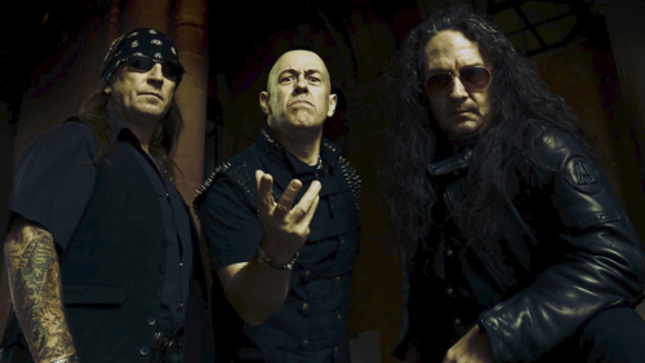 On April 24th M:Pire Of Evil, featuring Jeff "Mantas" Dunn (guitars) and Tony "Demolition Man" Dolan and best known as members of Venom during  the band's Prime Evil era, performed at the Keep It True 2015 festival in Lauda-Königshofen, Germany with drummer Abaddon as Venom Inc. The band is now gearing up for tour dates later this year; Dolan has posted the following message to the fans:

"Okay my brothers and sisters, a little something for the weekend. Have a look at it and let us know what songs you'd like to hear us perform on the upcoming live shows. I have heard 'cashing in', 'all about the money'... propaganda and bullshit. This is about you and the music, the legacy only! It is as much yours as it is all of ours, all of us. So, tell us..."

Go to this location to check out the songs for the Venom Inc. setlist and offer your feedback.

Fan-filmed video of Venom Inc.'s live debut can be viewed below:

BraveWords received the following exclusive press release just prior to the Venom Inc. performance at Keep It True 2015: