VIVIAN CAMPBELL - "We Make DEF LEPPARD Records Knowing That There's No Way In Hell Any Of Them Are Going To Sell Anything Close To Pyromania Or Hysteria"; Video 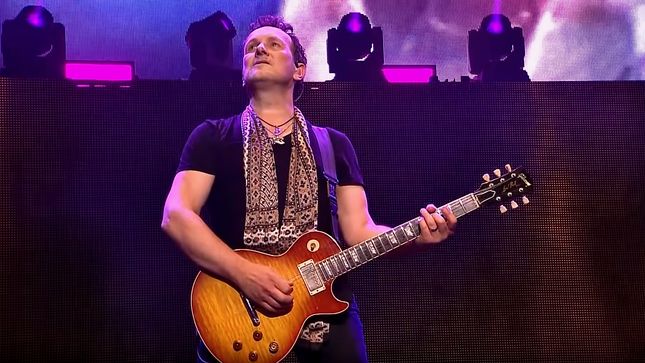 Planet Rock caught up with Last In Line's Andrew Freeman and Vivian Campbell at Planet Rockstock 2019. The pair discussed Last In Line's next record, and Campbell talked about next summer's "The Stadium Tour" featuring Def Leppard and Mötley Crüe, with Poison and Joan Jett & The Blackhearts. Watch below:

The world’s most iconic and celebrated rock legends will hit the road together next summer for a co-headlining tour so massive that it could only be held in America’s biggest stadiums. The Stadium Tour featuring Def Leppard, Mötley Crüe, with Poison and Joan Jett & The Blackhearts will hit select cities in the US where each band will bring their electrifying stage shows while promising to perform their stadium sized anthems. Produced by Live Nation, the summer tour is set to steamroll through America, visiting the country’s most iconic stadiums.

Def Leppard have released this video featuring behind-the-scenes footage from the tour announcement:

Tickets for the tour will go on-sale to the general public beginning Friday, December 13 at 10 AM at www.LiveNation.com, check local listings for details. Citi is the official presale credit card for the tour. As such, Citi cardmembers will have access to purchase presale tickets beginning Tuesday, December 10 at 10 AM, local time until Thursday, December 12 at 10 PM, local time through Citi EntertainmentSM. For complete presale details visit citientertainment.com.