VOID VATOR Metal Up With New Video "I Want More" 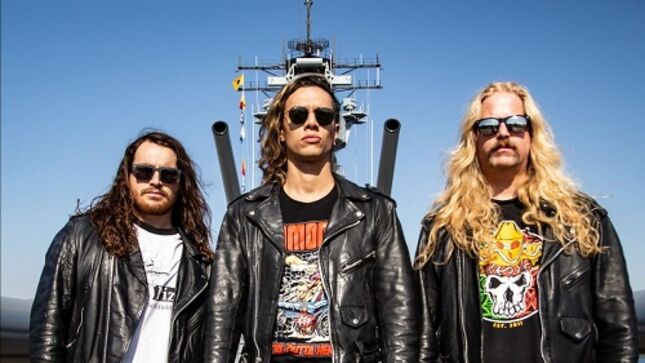 About this new video, the band comments: "'I Want More' is a continuation of the story that we started with our previous video 'I Can't Take It'. Rock and roll has been shut down in our town, so Void Vator packs up and drives off to play shows in Arizona where there is more freedom. They say that life imitates art, and in our case art and life happen to be the same thing."

"We've been working on our new record Great Fear Rising since our tour got cut five days in due to the lockdowns last year. Recording and following through all the necessary creative steps for its release has kept Void Vator alive. Great Fear Rising is our best album to date. 'I Want More' represents our attitude on life. We want more, we don't accept being tied down, we won't ask for permission, and we don't wait for an 'OK'. 'We keep doing what we want to do, and continue to find a way to play."

Fearlessly and relentlessly hammering all speakers, this new metal onslaught from the Los Angeles trio is definitely their hungriest and most assured record to date, with their sun-drenched brand of heavy metal taking absolutely no prisoners, while pulling influence from the likes of Power Trip, Megadeth, Metallica, Van Halen or Turbonegro. Void Vator's new album Great Fear Rising will be released worldwide on April 23rd through Ripple Music.

Void Vator have been striking since 2014 and quickly developed a reputation as a take-no-prisoners live act. Positioning themselves as worthy heirs of the New Wave of Traditional American Heavy Metal, they previously collaborated with Grammy-nominated producer Ulrich Wild (Pantera, Deftones, Metalocalypse) on their 2017 debut EP Dehumanized, then with world renowned producer Bill Metoyer (Slayer, DRI, Body Count) on their 2019 EP and Ripple Music debut Stranded. Shortly afterwards, their drummer Moura had to return to his homeland Germany due to visa issues. Fueled by anger and frustration, the band started work on the record immediately after their last tour was abruptly ended just five dates in, when the pandemic effectively put a stop to live music activities in the States for the rest of 2020.

As the world struggled to adjust to life after Covid, Void Vator went to the studio to record guitars, bass, and vocals with Michael Spreitzer of Devildriver at Audio Vault Studio in Torrance, CA. Louder and faster than their previous records, the songs on Great Fear Rising pull influence from Power Trip, Turbonegro, The Ramones, Megadeth, Sepultura, Metallica, Van Halen, Thin Lizzy and deals with "getting off your ass and going for what you want, climb the highest mountain, and feel like you're in control." The album was mixed and mastered on the East Coast in Milford, CT by Nick Bellmore of Toxic Holocaust / Kingdom Of Sorrow at Dexter’s Lab Recording, and will see an April 23rd, 2021 release on Ripple Music. Pre-orders can be placed now at this location.