VOIVOD Drummer MICHEL "AWAY" LANGEVIN Discusses Upcoming Live Release, Movie, Book, And Studio Album - "We Try To Keep Busy As Much As We Can"; Video 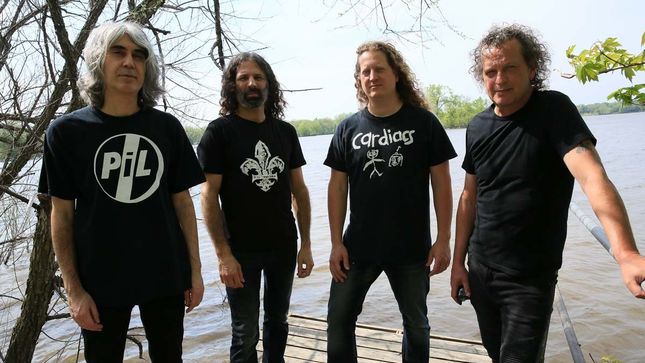 Drummer Michel “Away” Langevin spoke with Bandbond about the new release, and more. Watch the video below.

Asked why now is the right time to release a live album, Langevin said: "For the album The Wake, we toured a lot, and we had many plans put aside. And now that we are sort of confined at home, this year was a good year to catch up with these plans. We had shows recorded from last year, when we played festivals here in the province of Quebec, so we released in July an EP with a performance at the Montréal Jazz Festival. And then in November, we will release a full-on show from the Summer Fest in Québec City. So we had the time to mix it and master it and everything. I had time to do the art. We also took the opportunity this summer to work on a Voivod movie. We did a couple of videos. And we also sort of synced up with Logic Pro online where we can write a new album. So we try to keep busy as much as we can. Also, we did that online show that went really well, so we're thinking of maybe performing albums, specific albums, in the future. We actually had a world tour planned this year that was postponed to next year, but who knows? So we're trying to cope with the situation. It's the perfect timing to release a live album before the holidays. And then we'll see next year about a studio album."

Asked for more details on the Voivod movie, Michel reveals: "Actually, it's Sam Dunn, who did all these heavy metal documentaries... After the unfortunate passing of Piggy (guitarist Denis "Piggy" D'Amour) in 2005, we started this movie with him. And then Sam got really busy, and then Felipe (Belalcazar), who did the Death documentary, he's finishing the movie. He's also working on videos for the upcoming live album."

Lost Machine - Live was recorded in Québec City during the worldwide touring cycle for the band’s latest studio album The Wake, and will be released tomorrow, Friday, November 27, worldwide via Century Media Records.

Lost Machine - Live consist of 13 tracks across 74 packed minutes of playing time by one of the best live-acts in this day and age. The title will be available as limited CD with O-Card packaging (in its first European pressing), as Digital Album and as Gatefold 2LP on 180g vinyl in the following variations and limitations:

Lost Machine - Live can be pre-ordered in its various editions here.