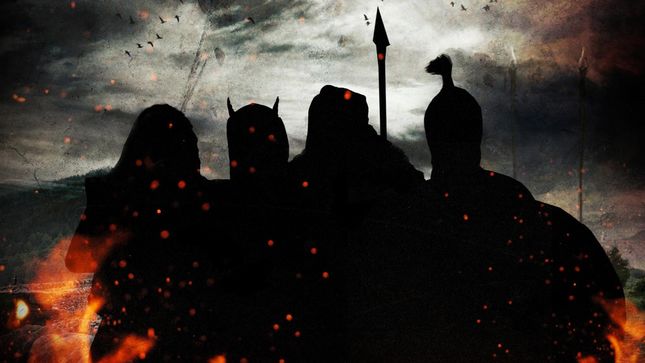 "We at Napalm Records just received a message from Odin," states the label. "Yes, Odin himself! His few words were mysterious, but the message was clear: Four kings of war were knocking on valhallas door to spend eternity in the realms of the gods. While waiting for admission, they told each other about the heroic deeds they survived in their lifetimes. Secretly listening to their stories, Odin decided that all living human beings on the Earth should know about these true stories of war and heroism. So he is about to sent them back with the mission to spread the stories of their battles upon mankind. The Warkings were born and pure and unadulterated heavy metal became their religion.

"Odin chose Napalm Records as the perfect platform for the Warkings to spread their stories. We were told to receive new information about these warriors every Wednesday from now on. To follow his order to spread their message, we‘ll launch the Warkings-Wednesday. From this week on, we will provide all of Odins informations to the world, before the four kings of war will be unleashed in mid September. We are as excited as one can be and waiting for big stories to tell on Warkings-Wednesday!"

The first statement from the kings of war is short and not very concisely: “Ready your breakfast and eat hearty...because we‘re coming for you at the Warkings-Wednesday."