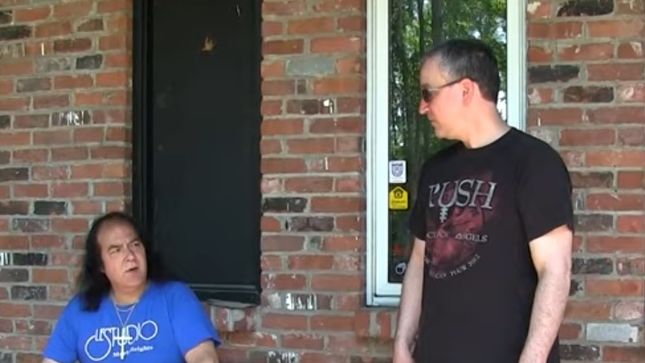 Jimmy Kay from The Metal Voice heads off to what remains of the famous Le Studio in Morin Heights, Quebec. Le Studio, where artists recorded and stayed. It was the venue for many notable Canadian and international artists, including, Rush, The Police, Bee Gees, Chicago, David Bowie, April Wine and Cat Stevens.

Jimmy Kay and Alan Dixon also spend some time discussing the artists and albums that were recorded there, the studio's history and speculate about Le Studio's future.

Renowned for its retreat-like location as well as its state-of-the-art equipment, it was one of the earliest studios to install Solid State Logic mixing desk and RADAR digital-recording equipment. Perry sold the studio in 1988. In 2008 the studio had gone out of business, and as of 2015 the property was up for sale. On August 11th, 2017, the building was partially destroyed by "a suspicious" fire.

“What Le Studio meant to us, is really hard to put into only a few sentences. It was not only a place where we did some of our best work, but we also experienced many profound personal moments there. To say nothing of the friendships that were forged there that still endure today. Le Studio played a key role in our album recording experience at a pivotal point in our career. We were already saddened to learn of its derelict state a few years ago, but upon hearing that it has now been destroyed by fire, it truly marks the end an age for the 3 of us,” remarked Geddy Lee on behalf of the band.

“We not only worked there for months at a time, but we lived and played in the home on the property, separated only by a beautiful lake and the glorious foothills of Laurentian Mountains,” added Lee, “it was truly a part of the great Canadian landscape…and literally a home away from home for us. It will always have a special place in our hearts.”

“From 1979 into the mid-80s — Permanent Waves, Moving Pictures, Signals, Grace Under Pressure — so much of our body of work was recorded at Le Studio,” said Neil Peart in an interview with George Stroumboulopoulos in 2014 after visiting the ruins of the studio at the time. “I felt lucky and grateful to have had all that,” remarked Peart. “On one hand, it’s sad that’s it’s gone, and it’s especially sad that no rock band will enjoy that retreat. What it meant artistically and personally together, to work in the studio all day then go play volleyball together at night under the lights. Those experiences were so formative, artistically and as a collaborative unit.”