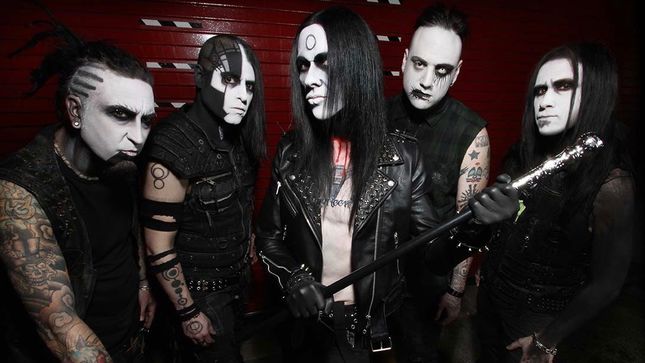 Wednesday 13’s current Lonesome Road To Hell Tour ends November 24th in Los Angeles at The Whisky. A week and a half later on December 5th, W13 will be hitting the studio to begin recording his eighth full-length album. That must mean everything is completely written? “Yes, for the most part,” answers The Duke of Spook, speaking exclusively to Brave Words scribe Aaron Small aboard his tour bus, which is parked outside The Rockpile in Toronto.

“We’ve written all the songs, I’ve written most of the lyrics; I just need to fine tune it. We did the demos. We’ve just got to work on the intro, the outro… and there’s another thing I want to do, but I don’t want to give it away. So, we have 99% of the music ready. We might write one or two more songs before then, just to have and see what happens.”

Previously, Wednesday indicated via social media that this new music is “heavy and dark.” A statement which he elaborates upon further. “Yes. Maybe I spoke too soon. It’s not as heavy as Condolences, it’s not as heavy as Monsters Of The Universe. It’s still got a heavy quality to it, but it’s more of a… it’s almost got more of a fun atmosphere to it – not as fun as Calling All Corpses. Maybe a little more Dixie Dead. I think Condolences, that title and that song kind of took over the whole concept of that record; it was all death and dark. This is a little more fun, haunted house, Return Of The Living Dead kind of record; if I could compare it to a movie.”

Back in September, W13 also mentioned online that he thought he had the album title. Is that name still going to grace the new record? “No. It’s totally changed. It’s going to be called Necrophaze. And I’m really stoked about this one! I got the title because someone asked me why my songs deal with necrophilia? I answered, ‘I guess I’ve been going through a phase… a Necrophaze… my whole music career.’ I’m already working on the artwork with my artist. This is something I’ve never really had a chance to do. I’ve got months to work with the art, whereas with Condolences, I had less than two weeks. They literally said, ‘You want this record out June 2nd (2017), you’ve got have it turned in by February 8th. I had no idea if I could get it done, but we did. The photo in the record was the only photo we saw that we liked, and we had to go with that. There wasn’t a lot of time to go through and pick out stuff. This time, it’s going to be completely thought out; there’s a lot of cool artwork. I’m still that old school fan of having the total package, and this package I’m working on is going to pull you into that world. It’s going to be a cool visual thing; something I haven’t done before. It’s the next chapter, we’ll see what happens…”

W13 recently played a few shows with guitarist John 5 (Rob Zombie), any chance of 5 making a guest appearance on Necrophaze? “I don’t think so… but we have some special guests already. I don’t want to make it seem like – I mean, it definitely crossed my mind cause the guy’s fucking awesome! And he really liked the band. Those shows, I wish we could have kept touring together, I wish we could have brought that here (to Toronto). We’ve definitely talked about doing some stuff, but I didn’t want this next record to be full of guests, cause as of right now we have three guests on it. And I’ve never had a guest. It’s not like I’m getting these guests to make people pay attention to it; it just all worked out with the songs and it makes sense.”

As far as a potential release date goes… “I’ve heard June, maybe April. I don’t know yet, it really is up to the label; Nuclear Blast. Our deadline to have the record finished and mixed is February 25th (2019).” Who will be handling the production duties? “I can’t tell you who we’re using yet, but Zeuss (who produced, mixed and mastered Condolences) is involved. We have a different producer, but Zeuss is mixing it. We’re going with someone else, and we’re doing it in Los Angeles. I want it to be comfortable, I want to be able to go home every night. I want to enjoy making this record. We’re doing it in an actual studio. This is the one! We’re building a lot more around this record. Next year we’ve got so much shit going on.” When pressed for a song title or two from Necrophaze, W13 replied, “Ah… no, it’s too early.”

Something that is coming in the very near future is New Year’s Eve, which means Wednesday 13 playing Ozzfest at The Forum in Los Angeles. “Yeah, we got that! I don’t know how we achieved that, but it’s really cool and we’re super stoked to be a part of that. It’s going to be great! My first New Year’s Eve with something cool to do. And, I get to do it with Ozzy, Manson, and Zombie.” Ever been to an Ozzfest before? “Not as Wednesday 13, but Murderdolls played with Ozzy, Steel Panther, and Korn at The O2 in London, England (in 2010) where Michael Jackson was rehearsing right before he passed away. This will be the first Ozzfest as Wednesday 13; that’s a good thing to have on your resume.” Did you attend an Ozzfest as a fan? “I’ve been to one Ozzfest, and that’s where I met Rob Zombie. I went to meet Rob Zombie, so I didn’t really stay for the day. I actually just went there to meet him and that was it, then I left. That was in North Carolina when Transylvania 90210 came out (in 2005). I heard he was a fan of the record. He had a radio show for five seconds and he played The Cramps, old school stuff, and ‘Look What The Bats Dragged In’. That was cool! He was a fan of it and that was the first time I met him. So that’s the only Ozzfest I’ve attended.”

On a personal note, Wednesday 13 has stopped drinking, lost weight, and is approaching ten months sober. What prompted this healthy living and abstinence from alcohol? “I got sick and tired of it. I just woke up one day and said, I don’t want to do this anymore.” Like the line in “I Just Want You” by Ozzy Osbourne – ‘I’m sick and tired of being sick and tired, I used to go to bed so high and wired.’ “Pretty much. I pretty much drank my 30s away. I’m 42 now, I’m a grandpa. It’s a lot of shit. There’s people who depend on me. I couldn’t separate the road life from going back home, cause I don’t do anything when I go back home except wait for the next tour. When you’re on tour, it’s the only job where you’re accepted if you’re fucked up or drunk. It’s easy to get eight bottles of Jack Daniel’s a night and drink ‘em all. It’s one of those jobs where you literally have it right in front of you every day, and I just kind of got dependent on it. It became my crutch I would use every night. It was not making me feel well. I’d had enough of it. First of the year, I was trying to do one of those New Year’s Resolution things. I started off good, and then I fucking fell off again in January and had a really bad night. I woke up the next day and went, alright, that’s it! No more of that. And I haven’t drank since then. I’ve dropped 45 pounds. I exercise every day. I just wanted to get healthy, and now I feel awesome; it’s given me this new confidence. I go on stage now like a mad man, instead of a drunk mad man. And I’m having fun!”

Going back to the Halloween shows in London, England; that’s something North American fans were incredibly envious of. On Friday, October 26th, W13 played the Skeletons album in its entirety to celebrate its tenth anniversary. “Yeah, first time we played some of those songs ever. Luckily, it went over great and we had a lot more time, this time. Cause we did the Transylvania ten-year anniversary, we did Fang Bang, and we didn’t have much rehearsal. We literally had about two days to learn a lot of that stuff. It’s like The Ramones with a lot of my older songs; it’s a lot of the same chords, just played different. That sounds easy, but it’s not. It was the first time we had a week to rehearse all of that, and work on the Frankenstein Drag Queens set, which was so much fun. So yeah, the Skeletons set went over great – I can’t believe it’s been ten years since that record.” Did you ever consider re-releasing Skeletons, with bonus tracks and/or live material, to commemorate the occasion? “Coming next year. I’m working on re-releasing everything next year. Basically, all those old copies out there, get ‘em while they last cause they’re going to change. The new ones will have bonus tracks, liner notes, different artwork; this is going to be everything I couldn’t do before, including vinyl.”

Jumping to the next night, Saturday, October 27th Wednesday, along with guitarists Roman Surman and Jack Tankersley, bassist Troy Doebbler, and drummer Kyle Castronovo played a complete Frankenstein Drag Queens set in full costume - including wigs and fishnet stockings. Originally, W13 had planned to play guitar during this extra special one-off show, but he didn’t. “It used to be just one guitar. Then we added a second, you don’t need three guitars for this. I feel good, I’m in shape, I want to kick my leg up in these hot pants; I don’t need a guitar holding me down. We’ve got two awesome guitar players, I’m going to have fun, and that was cool to do. The original (FDQ) lineup was so long ago, that was me in my parents’ garage with my friends. To hear those songs with this lineup, knowing how to play – and me knowing how to sing without blowing my voice out – we killed those songs! We down-tuned them to C, so they sounded even heavier. ‘Screwdriver’ sounds like a freight train! It makes you want to punch people, babies!” Please tell me you filmed this, the inaugural reunion of Frankenstein Drag Queens. “Yeah. We have a guy who did that last DVD just for touring, South Of Hell. The same guy films everything on tour, so we have footage from Bloodstock, from that; we’ll probably put out another just for tour DVD with that, and behind the scenes stuff. Eventually, we’ll do a professional surround sound DVD; there’s all kinds of stuff we can do.”

Touring will continue in 2019. In fact, W13 promises, “We’ll be back in Canada in March / April doing several dates, coming back as main support for a band. It will not be a headline run. That’ll be announced soon.”