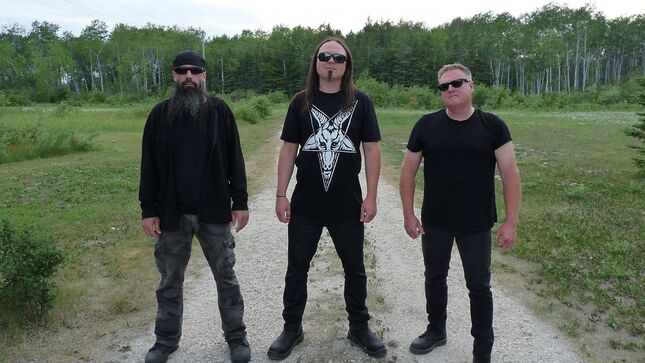 Formed in 2015, Votov is a three piece death metal band based out of Winnipeg, Manitoba, Canada. Fans describe their music as old school death metal, with thrash undertones. Their first self-titled album was released independently in 2017 and was hailed by fans worldwide as a brutal dark symphony of primeval dark grooves, bursting with aggression.

Votov’s writing style and execution is like a tank rolling through a battlefield. This is metal in its purest form, unwavering and unforgiving. Votov released their second album titled I.X.X.I. on CDN Records, March 20, 2020. The band promoted the album with music and lyric videos. The group has stayed busy on the recording front due to the absence of live shows in 2020.

They have announced the worldwide release of a classic Twisted Sister song taken from the Stay Hungry record entitled “The Beast”. The official music video was filmed by Dylan Ballie, and Drue Langlois (The Priest). Drue and George Ellis (The Archbishop) did an incredible job as actors. The Beast was directed by Dylan Ballie as well as Chuck Labossiere (who came up with the storyline and edited all footage). Votov are poised to continue working on their follow up to I.X.X.I., pushing their sound even further into the fathomless depths.