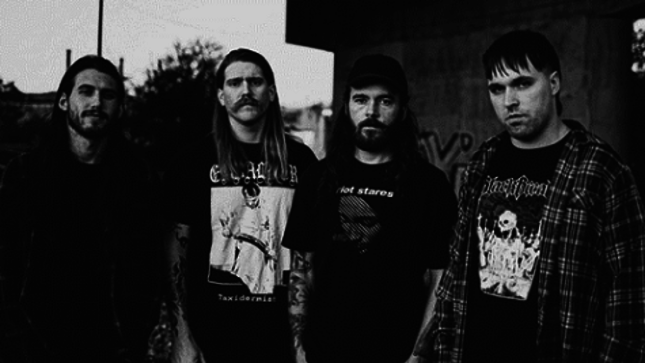 Prosthetic Records has announced the signing of South Carolina’s grind powerhouse - WVRM. The four-piece has confirmed details of their label debut - an uncompromising aural assault entitled Colony Collapse, due to be released on April 3rd. Pre-orders are available now at this location.

The first track to be released from Colony Collapse is titled "My Fucking Dixie (The New South)", and it can be heard now:

Of their signing to Prosthetic, WVRM comment: “We’re excited to be joining a roster that includes other bands from the Southeast and we’re very privileged to help bring more attention to that scene. Colony Collapse for us is the natural next step in a sound we’ve cultivated through every release over the years, especially from our last two full length albums, Swarm Sound and Heartache.”

Prosthetic Records’ E.J Johantgen adds: “WVRM are the next chapter in the history of American grind. Their dedication and work ethic is inspirational. Can’t wait for the world to hear this record!”

An uncompromising collection of 14 short, sharp shocks, Colony Collapse is a product of its surroundings, an anthology of its environment, and a detailed record of the lives of the people who made it. Over the course of their preceding three splits, four EPs and two full lengths, WVRM have experimented with pushing their personal and musical boundaries; Colony Collapse captures the evolution of their sound and politics in one relentless and violent release.

Far from being a leading light in a burgeoning local scene, WVRM are the only light in a miniscule scene in Greenville, South Carolina. Whilst the city is also home to death metal stalwarts, Nile, there is no flourishing hotbed of musical activity to be found. This creative isolation is just one of the driving forces behind the forceful aggression of WVRM.

WVRM’s music is political in nature, but far from a broad rage against the machine, their lyrics take a micro-look at the effects of socio-political entrenchment on everyday lives. Stating that their music sounds as it does - nihilistic, vicious, caustic - because of where they’re from, because of who they are - WVRM are striking out to redefine what extreme music from South Carolina can be.

Catch WVRM on tour with Barishi and Ether Coven: